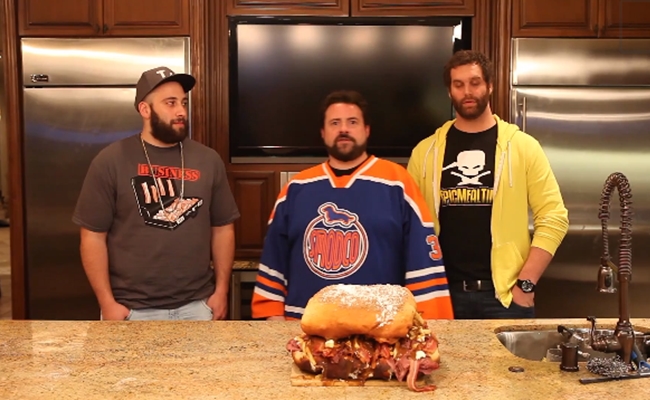 Director Kevin Smith has been on an online video roll as of late. In January, he signed up with Maker Studios and dropped by Ray William Johnson’s =3 for an episode. Smith is continuing his YouTube tour with an appearance on Epic Meal Time, where he joins the Canadian foursome for some supersized, north-of-the-border home cooking.

Smith provides some guest commentary as he and the EMT crew cook up a “Burly Beaver Sandwich” featuring Canadian favorites such as poutine, BeaverTails fried dough, and maple syrup. Though Smith is not Canadian (anyone who’s ever seen his movies knows of his love for New Jersey), the Epic Meal Time gang allow him to be an honorary Canuck because he always wears a hockey jersey.

Smith’s EMT cameo comes a little over a month after he signed on with Maker, a deal which will allow him to better leverage the content on his SeeSMod channel. A byproduct of the deal has been Smith’s increased involvement in the YouTube community. In addition to his appearances on EMT and =3, he was also a guest on the most recent episode of What’s Trending, where he discussed the future of TV. Spoiler alert: That “future” involves the Internet.

SeeSMod has seen almost a 50% subscriber increase since early January, and it is now up over 87,000 followers. Smith’s appearance on =3 provided the biggest bump, and his EMT gluttony-fest should provide a similar influx of subscribers. As Smith continues to mingle with YouTube favorites, his sub count will continue to trend upward.