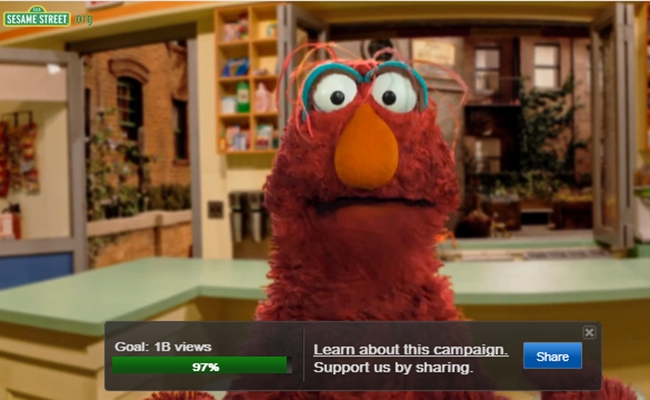 The billion views club on YouTube is a place usually reserved for popular musicians, chatty gamers, and sexy Phils, but one of America’s most beloved programs is hoping to crash the party. Sesame Street‘s YouTube channel is just 22 million views shy of the ten-digit milestone, and the PBS staple is hoping a newly-launched campaign will aid it in its unprecedented goal.

The latest video on the Sesame Street channel features classic character Telly Monster as he discovers a “secret video” that can only be opened if the educational feed reaches a billion views. He then launches into an impassioned speech begging users to watch lots of videos. Silly Telly. Doesn’t he know Sesame Street can easily score 22 million views with just one Harlem Shake video?

Sesame Street has reached its current view total thanks to a diligent upload schedule. The program got on the YouTube train early (back in January 2006) and his since uploaded more than 1400 videos. Elmo has been the channel’s biggest star; he is featured in the top seven most viewed videos, which account for more than 300 million views. That’s more views than Brittani Louise Taylor and Corridor Digital combined.

Sesame Street is making use of YouTube’s relatively new campaigns feature to show viewers how ever-so-close it is to a cool billion. If it can reach that mark, it will become the first children’s channel and the first nonprofit channel to join the club. I fully support this mission, and I hope you will join me in watching this wonderful video approximately 22 million times.