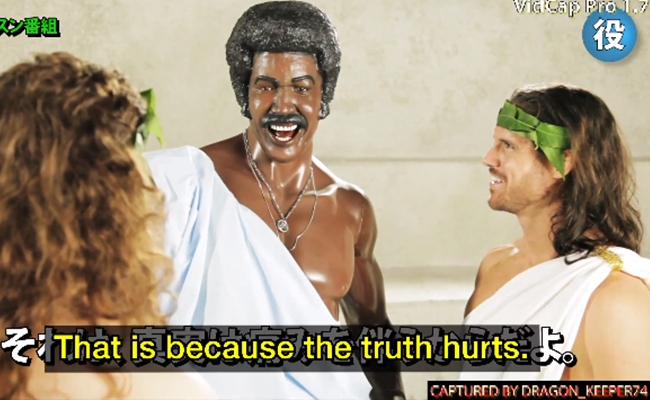 If you’ve never seen Black Dynamite, the spot-on and side-splittingly funny parody of blaxploitation films, then drop whatever you’re doing and watch it right now. It’s 90 minutes long, but the memories will last a lifetime. Go ahead, I’ll wait.

…Pretty funny, right? The folks at Nerdist agree. They have launched a new web series called Black Dynamite Model Citizen,  where a mannequin version of the Michael Jai White character beats the crap out of pro wrestlers and MMA fighters, all while teaching them important lessons about life, etiquette, and kicking ass. The series is styled after those crazy Japanese commercials that are all over YouTube, and it would not be out of place on the WTF Japan Seriously blog.

We’ve seen two certifiably ridiculous episodes thus far, with wrestlers Roddy Piper and John Hennigan joining the fun along with MMA fight Roy Nelson. These three men are badasses in the ring/octagon, but their moves pale in comparison to Black Dynamite’s. Eight more videos will come, with one released every Friday. Check it out, and don’t forget to laugh.

If that’s not the best video on YouTube, then I don’t know what is. The series is created in partnership with Ars Nova Entertainment, the production company behind Black Dynamite, which will hopefully lead to some relevant guest appearances. Given Michael Jai White’s experience in the online video world (he played Jax in Mortal Kombat: Legacy, a role he will reprise in Kevin Tancharoen’s upcoming feature film adaptation), we can hold out hope that the Spawn star will make an appearance in a later episode. After all, the only thing better than one Black Dynamite is two of him. Can you dig it?