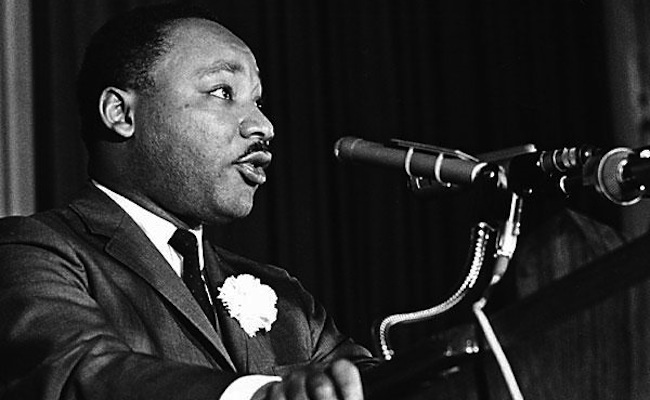 Auto-Tune The Dr. Martin Luther King Jr.’s ‘I Have A Dream’ Speech

The Brooklyn-based band The Gregory Brothers uploaded one of their signature auto-tuned music video tracks to the web around this time of year way back in 2009. It featured Martin Luther King Jr. Andrew Gregory (one of the three titular bros that make up the quartet along with Evan Gregory’s wife Sarah) said at the time it was “probably the greatest performance” of any of the unintentional singers who star in his musical group’s online videos.

“Michael did a treatment of his ‘I Have A Dream’ speech,” Andrew noted. “It works really well because the words are so lyrical and it’s written almost in a song structure, with refrains that build.”

Unfortunately, the video no longer exists on the Gregory Brothers YouTube channel. EMI Publishing owns the rights to King’s famous ‘I Have a Dream Speech,’ and the Gregory Brothers’ version was most likely a victim of the record label’s ardent and thorough copyright claims protection process.

Fortunately, some hardy pirate on the high seas of the web preserved the Gregory Brothers’ video and showcases it on his or her very own YouTube channel for the pleasure, edification, and inspiration of the online video masses.

Give it a watch before EMI takes this one down, too. And when you’re done, check out The Gregory Brothers’ and BarackDubs original collaboration ‘Let’s Stay Together,’ featuring unintentional singer and President of the United States Barack Obama trying to court a bipartisan world through the sweet, dulcet sounds of his perfectly tuned voice.