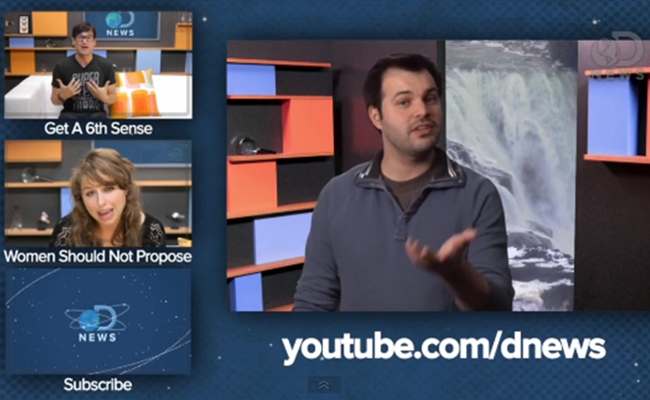 Back in May, the Discovery Channel acquired the thriving Revision3 network. When we then talked to Rev3 CEO Jim Louderback about the acquisition, he was quiet on the subject of collaborative productions. “There are a lot of opportunities for collaboration, he said, “but we haven’t started talking about it yet. I’m sure we’ll soon get started to figure out what those collaborations may look like, and what online original iterations of their content we could help them create.”

Seven months later, a collaborative effort between Discovery and Revision3 has hit YouTube. Rev3Games host Anthony Carboni and Sex+ guru Laci Green are two of the hosts of DNews, a YouTube iteration of Discovery’s own news coverage. Together with the third host, Discovery News writer Trace Dominguez, Carboni and Green are bringing a scientific and geeky spin to mainstream news items. Several episodes have already been posted, including an examination of the recent New York City subway death using social and behavioral psychology.

Stylistically, DNews seems to take a lot of hints from another Revision3-signed creator, Phil DeFranco. As with SourceFed, DNews jumps between its various hosts on a video-to-video basis, features a fast-paced, witty script, and seems to be targeted at a younger audience. Given SourceFed‘s popularity, DNews chose a pretty good model. Also, the trailer totally features the same walking-down-the-hallway shot as Revision3’s intro video for Adam Sessler. Are they going to do that for all of their new shows now?

Scientifically-minded folk will enjoy DNews and its regular, easy-to-parse updates, but it’s more important as a sign of the evolving relationship between Discovery and Revision3. If DNews  makes a splash similar to Phil DeFranco’s gig on Shark Week, more TV channel will be inclined to stick their hands into the online network cookie jar. That would bring more lucre to YouTube, and more metaphorical baked goods to TV producers. Everyone wins.