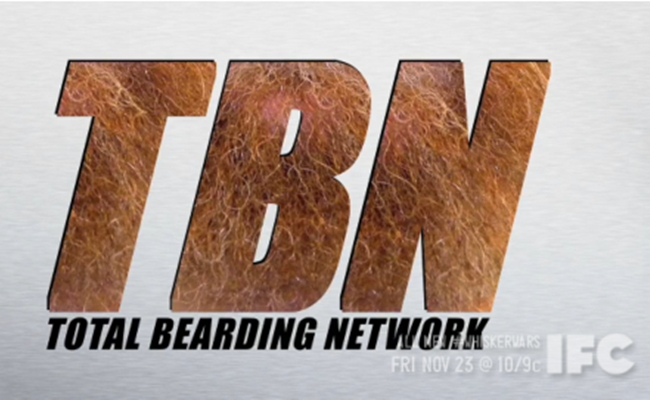 We’re more than halfway through No-Shave November (known as Movember to the philanthropically-inclined), and men all over the world have taken this eleventh month to show off their facial hair skills. Personally, I have abandoned my No-Shave attempt, since it was looking less like Harley from Epic Meal Time and more like Adam Morrison. However, if I had known about the new Total Bearding Network web series from IFC, I might have been inspired to keep it up.

Total Bearding Network is an animated fake news program that discusses various beard-related stories such a feature on the world’s first bearded woman and a look into the beard capital of the world, Brooklyn. The stories are very wacky, but what really shines are the banter segments, where the two hosts–strong-voiced Ken Guntruck and weak-willed Pete Meeker–form a news desk odd couple. Total Bearding Network’s style reminded me of Waco Valley, but with more hair.

Meeker is voiced by Chris Gethard (remember kids, it’s pronounced Geth-erd), the Jersey-born comedian who has carved out a nice little Internet space for himself. The Big Lake star has also hosted Portable Lounge, an interview series that has seen him shoot the bull with Bobby Moynihan, Kristen Schaal, and several other known names. Gethard is a good choice to voice a character named Meek, just as his co-star, Upright Citizens Brigade performer Jim Santangeli, has a deep timbre that brings personality to Guntruck.

Total Bearding Network is an web companion to Whisker Wars, the IFC show about actual, real-life competitive beard growers. The second season of that series will return to the IFC network on November 23, so TBN is, at least thus far, a marketing campaign as much as a web series. However, I’d expect TBN to run throughout Whisker Wars‘ season, which could allow it to grow its own legs. Or, in this case, its own beard.