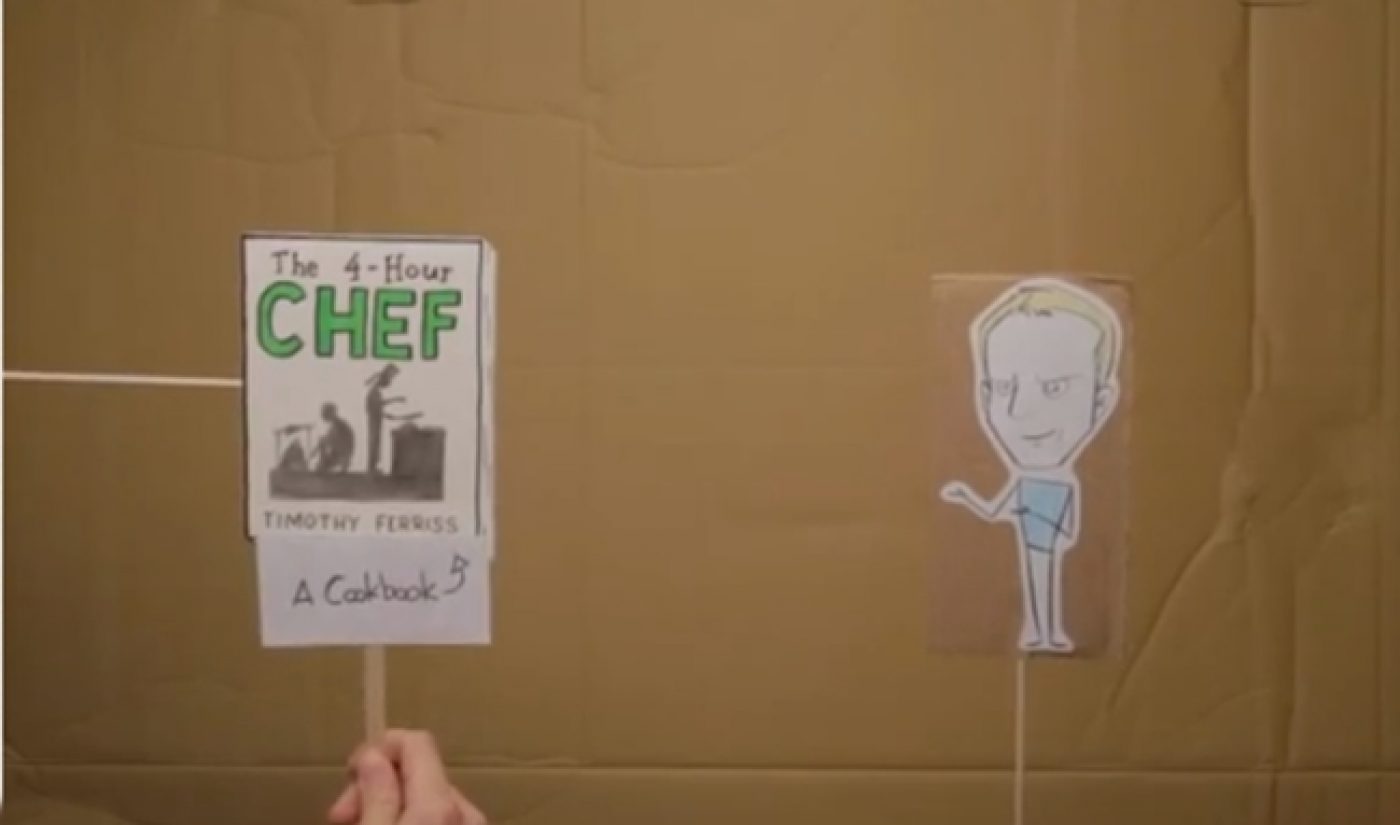 Tim Ferriss is many things–including a writer, a tango dancer, and a kickboxer–but he’s certainly not a conventional promoter. Ferriss, the author of two New York Times best sellers (The 4-Hour Workweek and The 4-Hour Body), is releasing his third book, titled The 4-Hour Chef, and he’s using the Internet (and YouTube in particular) as one of his most important resources.

Ferriss, who previously used a video trailer to promote The 4-Hour Body, has redoubled his efforts for his new book, releasing two engaging trailers to his 4-Hour Chef YouTube channel, becoming one of the first authors to utilize YouTube as a video marketing tool. “I really do enjoy being first to try things,” said Ferriss, “even if I end up taking a couple hours in the back as the guy on the front lines.”

Ferriss created his YouTube material with the help of the Mekanism ad agency. One trailer features a hi-fi series of jumpy images, all brought together through a series of quick match cuts. The second takes an interview with fellow author Todd Henry and places it in front of a cleverly composed series of hand-drawn images.

In both cases, Ferriss made sure that his videos featured a production quality not present in the book trailers released by other authors. “The [previous] book trailers were all fairly dry and they were relatively low budget; maybe there was some sort of Animoto type text being used.” said Ferriss, “I wanted to make a book trailer that from a cinematic standpoint looked just like a movie trailer.” Sure enough, the more cinematic of the two trailers could easily belong to a fast paced Hollywood thriller.

The two trailers have drawn great traffic; the cinematic one has received 1.5 million views while the explanatory one sits around 550 thousand. Though these are undeniably high numbers, Ferriss understands that this is still a highly specific cross-section of potential customers. “It’s fascinating that there are people like Epic Meal Time, who are getting close to 3 million subscribers, where there’s still such a large segment of the population who won’t know them unless they have a cable TV show with a small fraction of that viewership.” he noted. “But it’s slowly being displaced where they can have both but the digital is becoming more powerful with every passing day.”

The 4-Hour Chef‘s use of YouTube is only part of the way it is appealing to a digitally-inclined crowd. In addition, the book’s distributor is Amazon; it is one of the first books that the online retail giant has published. Ferriss chose to work with Amazon thanks to its unparalleled ability to contact its customers directly. “The biggest advantage of working with Amazon Publishing is the same advantage you have working with YouTubers over traditional TV.” he explained, “Most TV shows do not have direct access to their consumers because their customers are networks, their customers are ad agencies.”

Much in the same way a YouTube channel can directly message its subscribers, Amazon can go straight to the potential customer: “Amazon is the only publisher out there that if they so chose could send an email to 20 million people who are likely to buy your book,” said Ferriss. The drawback is significant: several brick-and-mortar retailers have boycotted Ferriss’ book; a large percentage of the book’s sales will have to come from the Internet, which provides another reason why Ferriss is so interested in YouTube-based promotion.

As for the book itself, it is a “cookbook for any skill that is disguised as a cookbook for food.” Ferriss, a “lifelong non-chef” uses his own methodology (described in the more informative of the two trailers) to quickly become an expert on any subject, and hopes to inform his readers how to do the same. If that’s not enough of a reason to buy the book, it may also have bacon-flavored bourbon in it.

The book’s release date is November 20; it is most readily available, naturally, on Amazon. With the 4-Hour Chef finished, Ferriss hopes to continue to expand his presence in the online video world. “I have a two day live course that will be all visual that will be debuted through Creative Live that’s equal to or higher quality than any program you’d see on cable TV.” said Ferriss. If the quality of his trailers are to be believed, I don’t see any reason to doubt him.