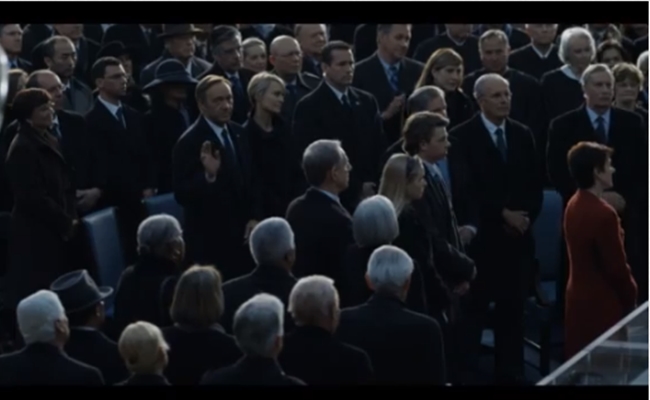 Fincher And Spacey’s ‘House of Cards’ Trailer Is Here. Get Excited.

Netflix wants to be the biggest, baddest provider of premium content on the web. We know this because they are spending a ridiculous amount of money to acquire original series for exclusive distribution on the Netflix platform. One of the site’s two biggest coups is its acquisition of the rights to House of Cards, for which it outbid HBO (the other, of course, is its distribution deal for the new Arrested Development season, which I am beyond excited to watch.) Two-and-a-half months before House of Cards‘ stated premiere date, Netflix has released a trailer for the series, and while you never want to buy too much into a trailer, OH MY GOD THIS LOOKS AWESOME.

The first thing I noticed was Kevin Spacey‘s voice, which seems fractionally British. I can’t tell if it is a homage to the original House of Cards series or just a weird choice by the veteran actor, so the jury’s still out on that one. David Fincher‘s cinematography, as usual, is absolutely gorgeous; he may be the best director to ever create a web series.

I was also impressed by what we see of Kate Mara, who plays an up-and-comer at the Washington Post. She is very self-assured and seems ready to prove that Rooney is the only member of the Mara family who can act. Finally, as several commenters noted, the voiceover element is quite bemusing and could add a whole extra layer if it is used in the actual series.

Keep in mind that this series was all set to get the green light on HBO before Netflix swooped in and snatched it up. Again, it’s early, we shouldn’t read too much into this, but I wouldn’t be surprised if House of Cards ends up being just as much of a quality TV show as Boardwalk Empire, Homeland, and the other heavy hitters of premium cable.