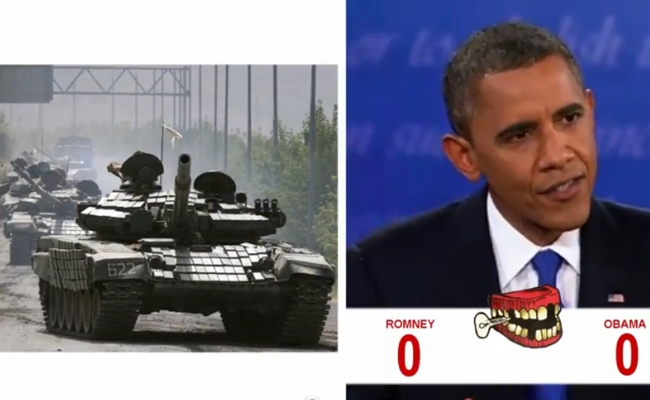 YouTube’s 60 channel expansion of its Original Channels Initiative is already starting to bear fruit. Bad Teeth, a UK-based comedy channel run by Base79 and Hat Trick Productions, has released a send up of the Presidential debates where the pair of creators at Cassetteboy edit both Obama and Romney to turn their otherwise genteel words into an absurd, ridiculous dialogue.

The editing turns Mitt Romney into a full-on maniac who enjoys partying with George W. Bush in Las Vegas and hunting women for sport. Barack Obama is much saner by comparison, but he does inform the American populace that he has thought about fisting Donald Trump every day he’s been in office. The key to the humor here is the neatness of the editing. Cassetteboy manages to keep in the pauses and reaction shots from the debate, which end up being extremely funny when taken out of context. That sense of timing is what separates this effort from, say, the Barack Obama ’99 Problems’ parody.

Cassetteboy is the alias of two British musicians, Mark Bolton and Steve Warlin, who have garnered over 18 million views on YouTube via their comedic editing videos. Despite gaining a sizeable following, it seems that the pair will now post a fair amount of their work on Bad Teeth, which hopes to become a hub for British comedy series in the same way Above Average has already featured several American funnymen. The Cassetteboy video is just a preview of what we can expect from Bad Teeth, which will launch in earnest next January.

In yesterday’s piece on Spy, I took some time to contrast it against similar American shows. In the same way, Cassetteboy could be described as a more British Gregory Brothers. It’s a little quieter and slightly more subtle in its emotion than what we’ve come to expect from the Songify the News team, so depending on your taste in comedy you’ll love one or the other (or both, or neither. But you get what I mean.) No matter what kind of funny you believe in, you have to admit that hearing the Presidential candidates advocate an invasion of France is something we’ve all been waiting to hear.