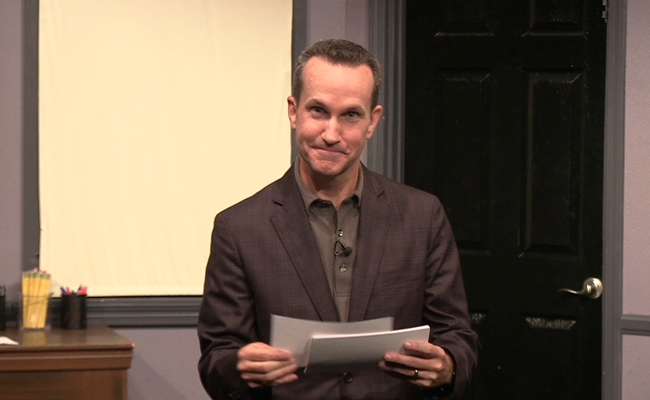 Jimmy Pardo, the host of the award-winning Never Not Funny podcast, has had some experience with online video in the past. Now, the standup comedian is taking hosting a new show where he will have the chance to flex his comedic muscles. Pardo is the leading man in Write Now, a new series on Nerdist that is one part game show, one part roast, and one part standup comedy.

Each episode of Write Now will feature three comedy writers and one standup comedian. The format is simple: in the first half of the show, the comedian delivers his routine; then, the three writers present jokes to Pardo making fun of the comedian’s performance. He reads them all aloud, roasting any writer who feeds him a flat joke. In the end, Pardo chooses one joke as the winner, and the writer who penned that line is awarded a whopping prize of 50 dollars. The first episode, featuring standup comedian Josh Comers (who is also himself a writer for Conan) has already hit Nerdist, and new ones will drop each Monday on the Chris Hardwick-run culture channel.

As a writer, I’m glad to see there’s a show out there about the process of writing. Thinking up funny material is a difficult job; just ask any improv actor. The best part is the way in which the audience acts as a filter. Some jokes are funny, but I was more interested in seeing how Pardo and the audience reacted to all the duds that show up with such imposing time constraints. Throwing in those crappy jokes makes it a lot easier to appreciate the good ones.

Pardo’s charisma is well known to anyone who has ever heard Never Not Funny, which has been produced consistently for the last six years. He treats Write Now like an actual game show, and the swagger that he displays adds a level of grandeur (and a certainly hammy quality) to the production. The A.V. Club write-up of the show espouses that Pardo should have as much TV success as Chelsea Handler. If Write Now can provide sufficient amounts of fun, he’ll be off to a good start.