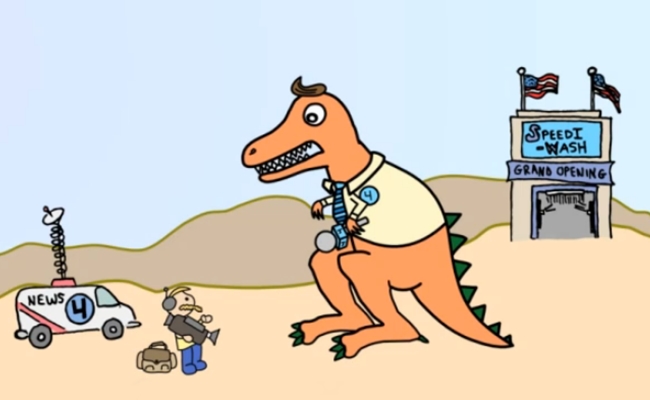 Bobby Moynihan’s The Sidecar was the first original series to premiere on the Above Average Network, the YouTube comedy hub run by Lorne Michaels‘ Broadway Video production company. Now, the channel is increasing its output, as two new shows have been launched: Waco Valley, an animated profile of a dinosaur newsman, and The Realest Candidate, about a pro-Romney rap mogul.

Waco Valley is the creator of Ben Warheit, a writer who, like many other comedians associated with Above Average, has ties to New York City’s Upright Citizens Brigade. The show centers around Lonnie Johnson, a dinosaur who works as a newscaster in a fictional town. Lonnie’s saurian nature has no bearing on how people see him; it seems he’s a dinosaur just because dinosaurs look funny, and that’s good enough to me. The show is crudely animated and, while there is a brief plot line in the first episode, the majority of the episode consists of silly news headlines such as “Was Dracula the greatest movie monster of all-time? Lawmakers should have an answer by Friday.” and one-liners such as “Dinner is like a night time version of breakfast!”

As for The Realest Candidate, early episodes would characterize it as an odd mix of The Colbert Report and Dave Chapelle’s Clayton Bigsby, White Supremacist sketch. Comedian Michael Che portrays a rapper who seeks a return to Reaganomics, as expressed in his campaign ad. Che hopes to fix the economy by investing new vodka flavors such as “grape, cognac, and blood” and opposes healthcare because “it’s like snitchin‘ on your disease.” The Realest Candidate‘s most recent episode drops Che into an O’Reilly Factor parody, with predictably absurd and one -sided results.

New episodes of The Realest Candidate will drop every Tuesday on Above Average, while Waco Valley takes over on Wednesday. When you add in The Sidecar, which has new episodes on Thursdays, the channel (a YouTube Original Channel, if we’re getting specific) is quickly becoming a must-subscribe channel for all comedy fans. Hopefully you enjoy these shows as much as I have, and don’t forget to buy American, especially when it comes to vodka.