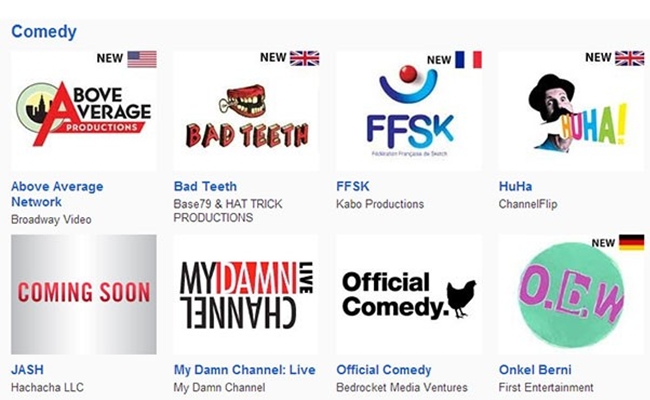 We are coming up on the one year anniversary of the YouTube Original Channels Initiative, when Google invested $100 million into 100 innovative and high-quality creators. There has speculation about whether Google would add to this Initiative, and sure enough, they announced yesterday that they will add 60 new Original Channels, and while some of the new channels are based in the USA, many spots were awarded to channels from the UK, France, and Germany.

53 of the 60 channels will launch immediately, with seven more coming in the near future. Out of the new channels, 15 are American, 18 are British, 11 are French, and nine are German. Given the international flavor of the new YouTube Originals, BBC was naturally a big winner. The network landed two channels within the new additions: a science channel with Top Gear‘s James May, and a nature channel based around the network’s popular Earth series.

Another big winner was Mahalo, an American search engine that was awarded a whopping nine Original Channels. The company’s own channel provides how-to videos, but the Original Channels it’s behind are mostly focused on exercise and healthy eating. Not to be outdone, one of their channels is the Inside My Kitchen food channel, and if that one keeps showcasing items as delicious-looking as these pork ribs, then they’re going to need a couple more health shows.

Among the networks awarded an Original Channel is Revision3; their Tech Feed channel was awarded funding, marking the first channel from Revision3 to be included within the YouTube Original Channels Initiative (several Revision3-signed creators, such as Phil DeFranco and The Fine Bros, have separate channels that are part of the Initiative.)

The original 100 channels included several Spanish-language offerings, including Clevver’s highly popular TeVe branch, but the French and German channels in the new set will be the first ones in their respective languages. It only makes sense that YouTube would continue to push itself as a global brand by bringing us offerings from around the world. This time next year, don’t be surprised if TV TOKYObit finds a windfall coming its way courtesy of the entrepreneurial folks at Google.