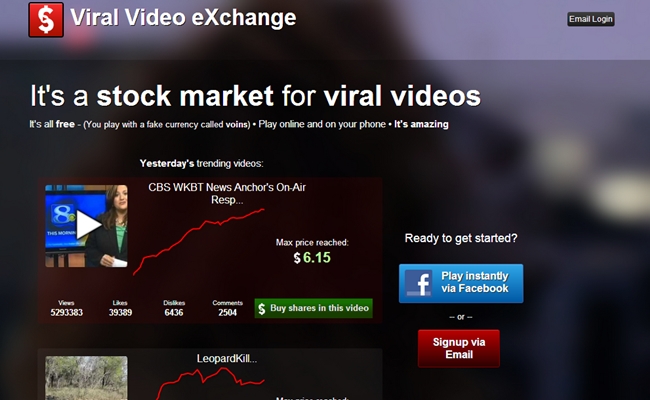 If the main commodity in the US was viral videos, our economy would be booming and we’d all be growing fat from the spoils provided by adorable children and excitable animals. While the US market still runs on boring things like real estate and banking, the brand new Viral Video Exchange offers a more entertaining alternate reality. The game allows users to buy and sell stock in online videos within a virtual marketplace that runs on a fake currency called ‘voins’.

The game is a clear spiritual successor to the Hollywood Stock Exchange, where users trade stock in movies based on how they think those films will perform at the box office. That website was a big hit in the late 90s, and became so popular that it started allowing users to play with real money a couple years ago. The HSX’s star has faded a bit recently, but the floor is still open and fairly active, and it remains a fun way to kill a few hours.

The HSX has a very simple system where the difference between a film’s share price and its box office performance is the amount you gain or lose. Obviously, without a box office to compare against, the Viral Video Exchange’s gameplay has to rely on a different metric. Each video’s share price is based on its daily views, with the price increasing as the video trends and decreasing as it becomes yesterday’s news. As users can also track the movement of a video’s likes, dislikes, and subs, the VVX serves a secondary purpose as a decent analytics tool. There are also occasional extras on the website’s blog.

Another way that the VVX sets itself apart from its Hollywood predecessor is by allowing users to ‘seed’ videos that they think will go viral, an option that costs more voins but has a much higher potential payoff. All of the videos on the Exchange got there by getting seeded, so the website acts as a discovery tool where players can learn about new videos that people are watching. It’s a great way to discover fresh content while also being able to act smugly superior when a video you’ve seeded does in fact go viral. Personally, I think the lunch tray ninja deserves more views than he’s received, but I should really just shut up and put my voins where my mouth is.