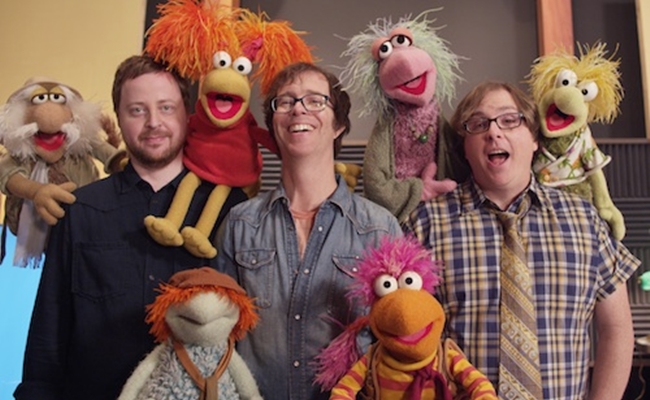 Ben Folds Five Back In Action (On Nerdist), Now With More Fraggle

What do you get when pop culture figures of the 80s, 90s, 00s, and 10s all hang out together in one video? The answer has been revealed today on Nerdist, as misleadingly named trio Ben Folds Five has released a music video on the channel for their new single, Do It Anyway.

The single is the group’s first in 13 years and features the 90s alt rockers in the studio along with the Fraggles (item of 80s nostalgia), Rob Corddry (most famous for his 00s Daily Show gig although Childrens Hospital ain’t doing so bad), Anna Kendrick (who doesn’t quite fit into the point I’m making but she’s cool so it’s ok), and the Nerdist himself, Chris Hardwick (emerging star of the 10s? We certainly hope so.).

Do It Anyway is the first single off of Ben Folds Five’s new album, ‘The Sound of the Life of the Mind’, which will be released tomorrow. The band had been broken up since 2000 but announced a reunion in early 2012. In an official press release, Hardwick described the process by which a Fraggle-filled music video came to fruition:

In a meeting with Lisa [Henson, CEO, The Jim Henson Company], she casually said, ‘”Next year is the 30th anniversary of ‘Fraggle Rock. Would you want to do anything with the Fraggles?” “WHAT THE [expletive]?? That’s an OPTION?!” I loudly replied. I think I scared her a little. I knew Ben had a new album releasing in September so I threw his name out. Lisa said ‘that would be amazing’ without hesitation. It was beautifully serendipitous. It seemed like a no-brainer to me, but I still cautiously pitched it to Ben, not really knowing his relationship with the show. I think I just spit words out, “YOU. VIDEO. FRAGGLES. ME PAY FOR!”

The video was joined by a neat little behind-the-scenes featurette. No explanation for why Corddry and Kendrick appear, but everyone loves the Muppets, and the Fraggles are basically just secluded Muppets. As the cast’s ad-libbed performance of the Fraggle Rock theme song would suggest, we’re dealing with some serious fans here. Would it shock anyone if Nerdist’s next project was a Barenaked Ladies music video featuring the cast of Sesame Street?