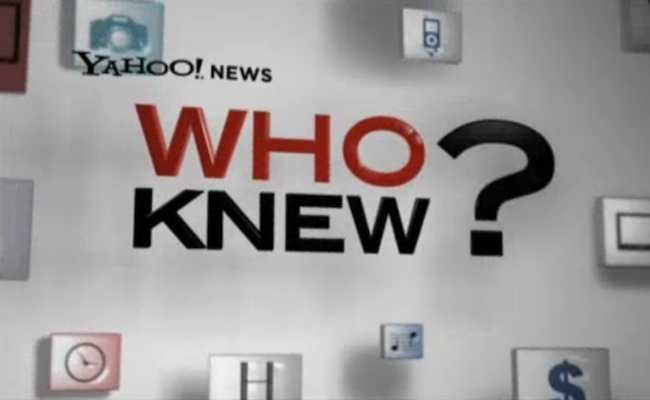 The series, which airs every weekday and is produced by Shine America, offers viewers a daily minute-and-a-half-or-so of neat-o facts and esoteric knowledge on newsworthy subjects (almost as if it were a multimedia version of the TodayILearned subreddit). It boasts a unique visual style, with Shine America calling it an “animated, kinetic-typography show.”

Who Knew? hit the ground running in 2010, with it’s lightning-quick text scrolls and clear, informative style helping it become almost an instant hit and, eventually, Yahoo’s self-proclaimed most successful original series of all time. According to internal stats provided by the online portal and online video destination with a shiny new CEO, the series has been streamed over 100 million times. And in addition to those stast, Who Knew? spawned a spin-off series on the Yahoo’s celebrity and pop culture  site omg!.

600 episodes is no easy feat (and the production pace shows no signs of slowing with t least 150 more episodes slated for release through the end of the year), so the series has far from run its course. Shine America is certainly proud of the achievement. Cue David Anderson, the Senior VP for the company’s digital division:

“With every digital production Shine America produces, creative concepts always come first, knowing that this is the key to building amazing and long running content brands…Working with great platforms and brands like Yahoo! and Toyota has proven six hundred times over that quality digital entertainment really can shine.”

Here’s to 150 more tidbits about long hair and presidential birthdays that will hopefully make me the life of small talk at whatever party I attend next.