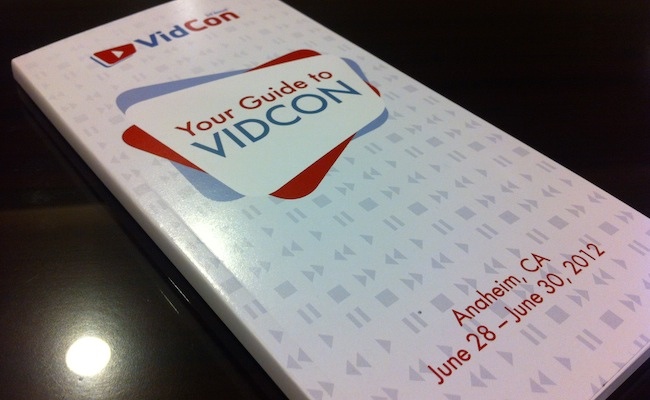 What’s the only conventions in the country where 7,000+ attendees armed with prosumer cameras and handhelds can see a collection of the internet’s most famous superstars together on the ground and on stage in one location interacting with fans? And what’s the one place where those 7,000+ attendees can film an amount of footage of those internet (and now outside the internet) famous superstars that adds up to hundreds of hours of content in aggregate after only a few moments in real time? VidCon! And it’s finally here.

The Third Annual iteration of the Comic-Con of the YouTube world is underway at the Anaheim Convention Center. And with handfuls of panels, presentations, and parties on the programming lineup that all look and read like eye and ear candy for anyone involved in the online video industry, it’s hard to not be struck by a paralysis of choice over which events to attend. But don’t worry! We’ll help you sort it out.

Check this handy guide we at Tubefilter have put together that will direct you towards some of the programs we’ll be attending. You can’t really go wrong at Vidcon, but unless you’re a quantum mechanic, you also can’t be in two places at once. Hopefully this will help you in your decision-making process:

VidCon 2012 Pre-Party
7:00PM – 10:00PM – K1 Speed Raceway, Anaheim
Come join us at the Official Pre-Party for VidCon 2012: Go Karts and Food Trucks at K1 Speed Indoor Go Kart Racing in Anaheim! Tubefilter and Big Frame are taking over the racetrack for the official VidCon kickoff party, along with Alphabird and Mobli. Drop in, hang out, and race with some of the biggest names on YouTube!

It’s a jungle out there. But it doesn’t have to be. In this session you will find a unique case study about two brands looking to join forces on the social video stage, to promote their union and integrate their messaging in the regularly scheduled programming of the social Web. Ad agency Sapient Nitro and Alphabird brought 10 YouTube influencers to Citi’s Google Wallet campaign to engage mass targeted audiences in a conversation and a call to action.

Producers in online entertainment live by the mantra: “I wear many hats”. Join some of the producers who have helped grow an industry that hadn’t existed 10 years ago and hear how they have learned from past projects: both successes and failures.

With premium programming capturing enormous attention from a coveted generation of viewers, these forward-thinking digital CEOs share insights on building successful brands and communities in the digital age. Hear firsthand what the leaders of some of the top ranked digital entertainment networks have to say about the future of video and the expansive opportunities ahead

YouTube Creators have become their own Media Networks. Not since the invention of the internet has business been so tantalized and terrified by this dramatic powershift. This will be a lively discussion of epic ways to strike the right and wrong relationship between brands and digital influencers.

Celebrate The Web 6: Level Up! is a web series festival that challenges creatives to write, shoot, edit and upload a web series pilot in seven days or less. After surviving that, they must run through the gauntlet of our judges’ panel and the voting public. We present today the Judge’s Prize and Audience Choice winning team.

The Future of YouTube
5:00PM to 5:30PM – Pacific C
Seven years ago, the first video was shared on YouTube. Today, over 72 hours of video are uploaded to the site each minute. Through YouTube, our creators are reaching passionate global audiences, driving the evolution of content, and building the channels of the future. Join us to learn how we’ll continue this journey together.

Friday, June 29 – VidCon Day 1 (Note: For a list of signings and who’s on the mainstage at what time, check out the VidCon Agenda)

The Maker Story
11:00AM – 12:00PM – 201CD
Have you ever wondered how Maker Studios got its start? Find out first hand from the founding members of one of YouTube’s fastest growing networks.

Join these kitchen masters for a discussion about how they found their perfect recipe for success in creating online cooking shows.

This panel session looks at how online success can be transformed into TV success. A) from the point of view of incubating content online and having it travel to TV distribution, but also B) by using online video extensions to increase TV audience viewership (acquisition), keep audiences watching more (retention), and to increase monetisation.

This panel brings together Hip Hop artists who work with some of the most influential names on YouTube and Hip Hop to talk about how YouTube changed the game for up and coming rappers and what is next for Hip Hop on YouTube.

Saturday, June 30 – VidCon Day 2 (Note: For a list of signings and who’s on the mainstage at what time, check out the VidCon Agenda)

Collaborate with a YouTube Star…in just 1 hour!
11:00AM – 12:00PM – 201A – Ben Relles, Founder of Barely Political & Head of Creative Development at YouTube; YouTube Stars
In this one of a kind break-out session, YouTube stars will be in the room and ready to collaborate on the spot with you, the VidCon attendees. There will also be a short discussion on how you can best collaborate with other YouTubers.

Did you ever feel like an outsider growing up? Squaresville takes on the complex, weird, funny world of two teenagers growing up in the suburbs. Learn about the creative process behind Squaresville, and how we aimed to embrace a web-specific audience as a scripted web series. Join a panel of seasoned web professionals and new faces with the cast and crew behind Squaresville.

Watching online video can be like trying to drink from a fire hose—on YouTube alone over 72 hours of video are uploaded every minute! How can you stay on top of everything? Hear the experts weigh in on the mix of techniques they use to find and deliver the best content to their audiences.

It is sometimes a challenge just asking your audience to promote your series, but how to you dive into asking the audience to actually monetarily invest in your shows? Crowdfunding sites have become a way to help answer that question. Come hear from some of the active sites as well as creators who have successfully used this unique funding option.

Enroll at Video Game High School, where we are going to put the cool back in exploring long form-narrative storytelling in the age of creator controlled digital distribution. Listen to the folks behind the landmark RocketJump webseries as they avoid boring you to death as ruminate on the past shoot and philosophize about the future of internet content.

Former King of the Web campaigners, and some of the hottest names on YouTube will participate in a Truth or Dare style Q&A session – moderated by King of the Web CEO, Maggie Finch. The panel will feature rounds of questions you’ve always wanted to ask and answers you’d never thought you’d hear. It’ll be an intense, drop-some-serioius-knowledge-on-ya discussion of industry trends, insights, AND things that are far too personal for a typical panel.

The Value that Networks bring and How to Pick the Right One For You
2:15 – 3:15PM – 210B – Jim Louderback, CEO at Revision3; Sam Wick, SVP, Business Development & Operations at Maker; Molly Templeton at My Damn Channel; Philip DeFranco (The Philip DeFranco Show, SourceFed); Max Benator, Executive Producer at Sonia’s Travels

Should you join a network? What can they offer you and how do you decide? And what questions do you need to ask before making any decisions. This session will cover those key questions and more.

We hope to see you at a few of the above and around all the Vidcon events. And if you’d like to meet up in person for a few, be sure to holler at us on Twitter. Happy coning and feel free to add your favorite mus-see panels in the comments below!