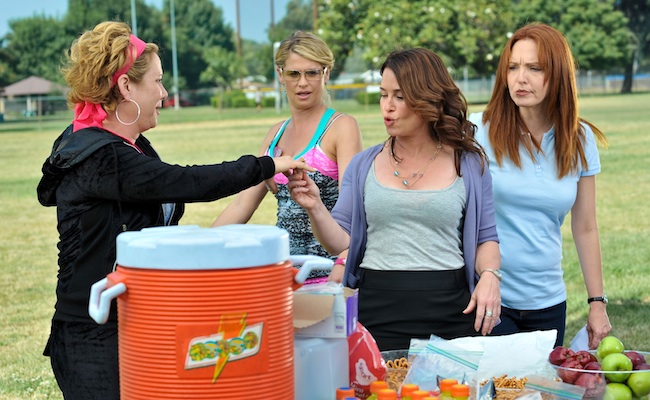 After Michael Eisner made his pitch to online video advertisers at the AOL Digital Content NewFront in New York City, the newly promoted CEO of his multi-platform independent studio Vuguru took the stage. Larry Tanz addressed the audience of advertisers, brand representatives, and reporters before showing off a pair of online originals he noted would soon debut on On AOL, the internet portal’s shiny new video destination.

One of those originals was Little Women Big Cars, a Vuguru original series directed by Melanie Mayron, created by Sherry Coben (Kate & Allie), and starring an ensemble cast headlined by Amy Yasbeck (Wings, Hot in Cleveland), Kristy Swanson (Buffy the Vampire Slayer, Psych), Romy Rosemont (Glee), Julie Warner (Crash, Nip/Tuck), Ed Begley Jr. (Portlandia, The New Adventures of Old Christine) and Antonio Sabato Jr. (Melrose Place, The Bold and the Beautiful). It’s about four moms navigating the comedy, drama, and associated gossip of PTA meetings, elementary school committees, soccer practices, Antonio Sabato Jr.’s body, and all the other trappings of suburban life while driving around in vehicles big enough to fit all the equipment of – and everyone on – their kids’ Pop Warner Youth Football team.

The 17-or-so installments of Little Women Big Cars debuted all at once on AOL On Parenting on May 7. Since then, the episodes have been viewed an aggregate total of 2.4 million times (according to publicly available AOL view counts). That’s not bad! And is a clear display that AOL can leverage its massive audience (which is roughly 108 million unique monthly visitors) to elevate the viewership of its premiere video offerings from content partners like Vuguru.

Here’s Tanz on what it was like to work with AOL on the project:

We were excited to partner with AOL on their recently launched AOL On video platform as it gave us a venue to create great content for women and moms. We found and loved Sherry Coben’s funny and honest story about four soccer moms balancing their busy schedules, family lives, and sanity. It fit AOL’s audience and female demographic, while also telling a compelling story so many women can relate to in their own lives.

The other Vuguru original series Tanz showcased at AOL’s NewFront was Fetching, a dramedy from Amy Harris (who co-produced HBO’s Sex and the City) about NYC relationships and doggy day care. It’s set to premiere on International Take Your Dog to Work Day on on June 18 on AOL On Relationships. Stay tuned.