Univision President at Variety Summit: ‘You Can’t Be Relevant If You’re Not Available’ 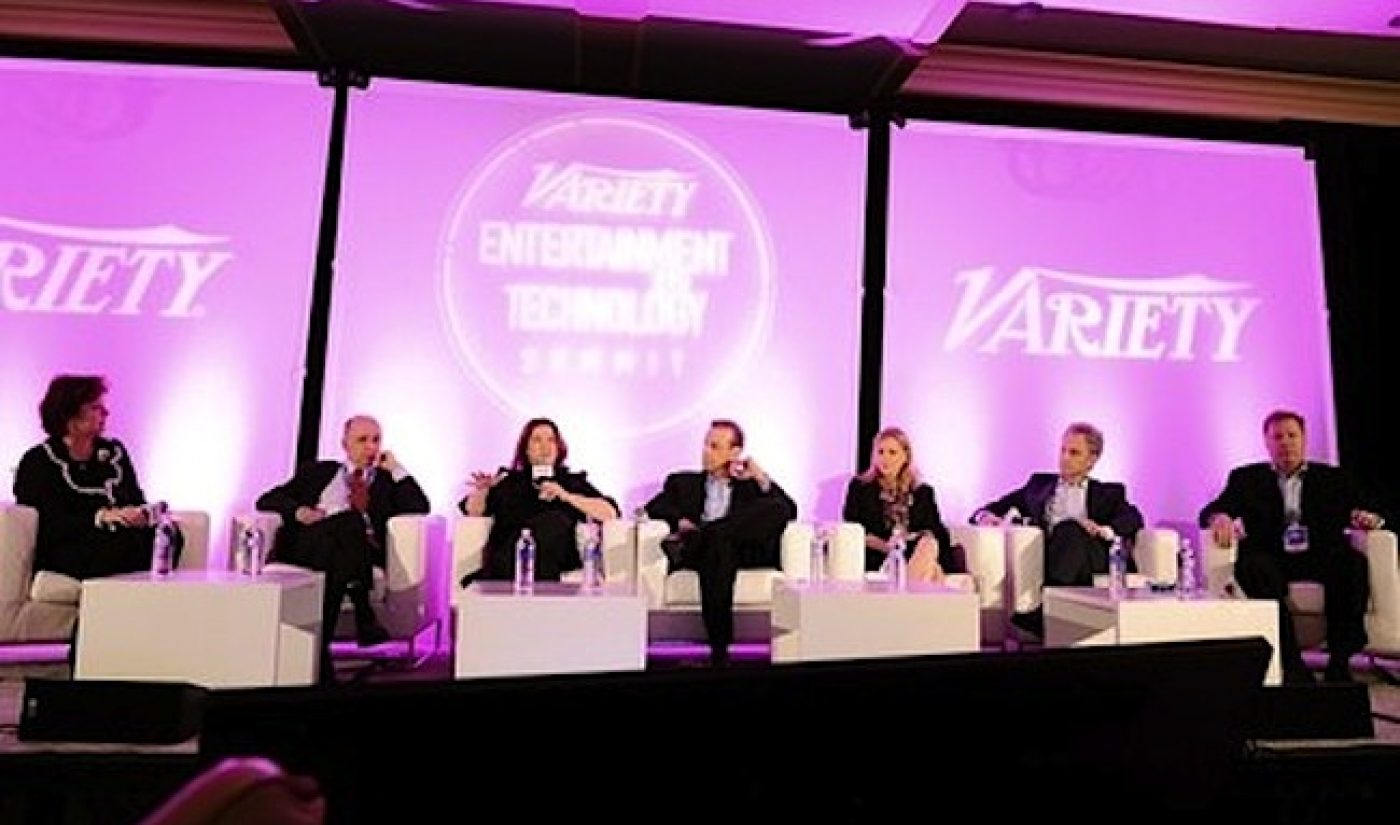 All of the speakers agreed that we are still in a time of flux, with elements of the entertainment business simultaneously converging and falling apart. Turns out independent content creators aren’t the only ones still trying to figure out how to maximize monetization on digital platforms!

Fox TV Studios’ Madden said, “We were used to a clear and stable process where if you got a show on long enough, it had a certain amount of DVD and potentially syndication value. That’s now all up for grabs. If we’re lucky enough to get a show that works and the audience likes, how do we make money from it?”

Zigler said that at NBCUniversal, the focus is on three areas: understanding what content works, exploring new business models, and observing consumer behavior around their content. “We start with a nugget of content, which is usually a television show.” said Zigler. “And then try to understand how audiences are viewing all of the related content we create and distribute on other platforms.”

Similarly, Conroy said the three main areas of focus at Univision Interactive are the creation of unique content for different devices; second screen experiences to complement their TV shows; and distribution, “Because you can’t be relevant if you’re not available.”

Ostroff helped birth and run the CW network prior to joining Condé Nast in October 2011. She plans on drawing on her previous experience working at the only television network born in the digital age to aide her in figuring out how to best exploit Condé Nast’s iconic brands, such as Vogue, The New Yorker and Wired, on additional platforms.

Green and Sykes brought a different point of reference to the conversation. ClearChannel’s Sykes said that there are 40 million people who now watch television on their radio station web sites. His company just invested in Ryan Seacrest’s business as part of their expansion into video content.

Anonymous Content works on a large number of commercial campaigns, many of which produce material that spans multiple platforms. Green said that with advertising in the digital realm, they face a constant challenge in figuring out how to work with two very different groups – bureaucratic, stratified ad agencies who go through a longer decision-making process and technology companies that are all about quick action.

The Challenge of Multiple Screens

The majority of viewers who are looking at a laptop, mobile device or tablet while watching television are doing something on them that has nothing to do with the programming on the big screen in front of them. Capturing that audience is a prime concern, and one way that NBCUniversal is experimenting with this is through an additive synchronous experience. Zigler believes that “good still wins,” and if you give the audience solid content that enriches their viewing experience, they will tune in.

Current experiments include the NBC Live app for the iPad and the web, which they describe as “the ultimate companion for watching NBC TV.” There’s a fun li’l video from The Office star Rainn Wilson explaining how to use it here.

Basically, the app syncs up with the live show you are watching, and provides a bunch of related ancillary content as well as the ability to both follow your friends’ comments and to post your own to Facebook and Twitter. “It’s back to the water cooler, just live and in real time,” said Zigler. “We have to deal with technology issues and advertising issues, but there’s stronger engagement if we do it well.”

Beware the Pissed Off Fan

Madden praised USA’s efforts to engage audiences across platforms with endeavors such as an online graphic novel for Burn Notice and an upcoming game for White Collar, but cautioned that such engagement can result in unforeseen consequences for show producers.

The Killing was a show that launched with an enormous amount of attention, so folks in the Twitter-verse were engaged right away. The vocal audience had some very specific expectations about what plot details would be revealed by the end of the first season of the murder-mystery, such as the identity of the killer. [SPOILER ALERT!] When this did not happen, there was a huge backlash from disappointed fans.

Madden said this strong reaction found its way into the producers’ conversations about the next season of the show. The feedback changed their decision about how to communicate with the fans about what they would find out during Season 2 of the show, reaffirming the idea Damon Lindelof talked about in his Summit keynote regarding audience expectation of two-way communication with show creators and filmmakers. It’s not just enough anymore to put out a good show – the fans want to know creators are listening.

When the discussion turned to web originals, the panelists were generally optimistic. Zigler said that she believes original web content will begin to compete with material produced by the studios sooner rather than later.

“The studios don’t own that real estate,” she said. Companies like Google have the money to commission content, as well as the technical expertise to crack the nut of multi-platform audience engagement. She suggested that the other thing that may help web content become competitive is the ability to aggregate an audience over time, as opposed to broadcast or cable shows, which need a large number of viewers to tune in at one particular moment.

Madden said that Fox Television Studios considers Netflix a buyer just as it would any other traditional outlet. Hulu is starting to get into that business, and he assumes that Amazon and Google are not far behind (he did not seem to include Google’s recent $100 million spend on YouTube channels in this category, as the budgets for the shows are much, much lower than traditional television content). All of this is good news for content creators, for as these services attempt to increase their subscriber numbers, they will look to original, exclusive content as a differentiator.

The Fork in the Road

One of the big buzzwords at Digital Hollywood this year was Disruption. What are companies like Netflix and Hulu doing to current business models? Is the cable and satellite audience losing ground to the cord cutters, cord shavers, and cord nevers, or is it all just hype at this point? As Ostroff moves from the business of making traditional television to a new way of creating content at Condé Nast, she has been thinking a lot about these questions.

“We are at a fork in the road where over the next 10 years we will see a lot of shifts and changes,” she said. “You have a huge business in cable with bundled content. When people start to get content in different ways, will they start to look at their cable bill and begin questioning that? The ability to get content on different platforms means everything will start to shift…. [there are] too many choices, too much content out there to be able to wrangle everyone the way the cable networks have been able to do thus far.” She believes that the viewing habits of 18-34 year old consumers are already changing, but that it will take the over-40 generation longer to shift to the digital space to get their content.

Sykes stressed the need to go where your customers are going. For Clear Channel, the big surprise was that many of their fans were actually listening to their favorite stations on their phones. While many companies are worried about how making their content available on multiple platforms might cannibalize their core audience (and largest profit generators), Sykes suggested that, “If you don’t cannibalize yourself, someone else will. This is not a revolution, it’s an evolution…When television came out, it was supposed to knock out radio. It didn’t. Cable was supposed to knock out broadcast. It didn’t. These new choices are enriching the experience of the consumer. Businesses need to understand that it’s a blended choice, and the consumer will win out in the end.”