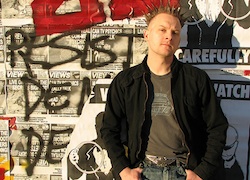 Brian Brushwood is the spikey haired lovechild of David Blaine and Mystery (that’s not Criss Angel) who first gained notoriety in 2000 when he took his Bizarre Magic Show on a full-time college tour, wowing fratacular audiences with crowd-pleasing escapes and mind-reading tricks.

Since then, the American magician has showcased spectacles on The Tonight Show and Life Beyond Limits, authored three books (Cheats, Cons, Swindles & Tricks: 57 Ways to Scam a Free Drink, Pack the House: The Ultimate, Ever-Growing Guide to Increasing Attendance to YOUR Campus Events, and Professional’s Guide to Fire Eating) with a fourth one in the works (Scam School: Volume 1 is scheduled to debut March 14), and logged at least 205 episodes of his Revision3 original web series Scam School.

The program first debuted in April 2008 and was one of the then uber-tech-centric online video network’s first forays into the kind of show that neither Alex Albrecht nor Kevin Rose could’ve hosted. It features Brushwood frequenting bars (sometimes with fellow magicians) to wow and amaze mild-mannered passers-by with seeming unbelievable tricks, which he then teaches those mild-mannered passers-by exactly how to perform.

Nearly four years after its premiere, Scam School is still releasing installments. It’s a pretty good show, too! And Bruswhood’s career seems to be doing well! But most every successful career was struggling at some point, as was Brushwood’s before he received some much needed inspiration.

In October of 1995, Buswhood e-mailed one of his heroes for magical career advice. The next morning, Teller wrote back. Here’s an excerpt:

I should be a film editor. I’m a magician. And if I’m good, it’s because I should be a film editor.  Bach should have written opera or plays.  But instead, he worked in eighteenth-century counterpoint. That’s why his counterpoints have so much more point than other contrapuntalists.  They have passion and plot. Shakespeare, on the other hand, should have been a musician, writing counterpoint. That’s why his plays stand out from the others through their plot and music.

Bruswhood published the correspondence in 2009, but if I just discovered it (via a Teller’s Twitter), I figured you may be in need of discovering it, too. It’s a fantastic exchange, and one you can most certainly enjoy and learn from even if you’re not and/or have no desire to be a member of the Magic Castle. Check it out in its entirety at Brushwood’s blog. And, if you like it, be sure to read more letters of note here.