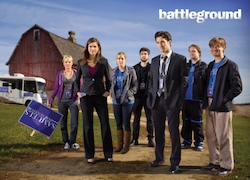 Battleground, Hulu’s first original scripted series from executive producer Marc Webb (The Amazing Spider-Man), is a solid addition to Hulu’s slate of original programming. Centered around the staff of a losing campaign in the 2012 Wisconsin senate race, Battleground is a political comedy that skews to the Choose or Loose demo and offers quality humor.

Instead of focusing on older, experienced West Wing-type politicians and staff, the show follows Chris “Tak” Davis (Jay Hayden), a young campaign manager currently on a 0-6 losing streak. He leads a motley campaign crew trying to win against the Makers’ campaign, the current favorites and Tak’s former boss.

While underdog political stories are nothing new, Battleground is a lighthearted series that becomes more enjoyable the more you watch it. That probably has to do with the fact the program is less The Candidate and more The Office. The inter-personal relationships between the campaign crew is what makes up most of the storyline, not the idiosyncrasies of talking points or political posturing (which, this being an election year, I’m sure we’re going to get our fill of soon). The one stand out performer is Ben Samuel, whose character grows throughout the pilot and offers subtle laughs as a former-renaissance-fair-sorcerer-turned-campaign-volunteer.

Originally developed for Fox Television in 2010, creator J.D. Walsh refused to let the show die after the network passed on the project. After Walsh financed a 20-minute pilot by way of generous and supportive family members, the series eventually found its way to Hulu. The series’ 13 half-hour episodes marks a step up in the length and quality of Hulu’s original slate.

Battleground is worth a watch, but series is not without few low ratings points. A lot of them involve the use of Bushisms in the beginning (they got old when Obama got into office) and some of the emotional scenes feel more contrived than natural. But check out the show for yourself. New episodes air every Tuesday on Hulu.com.