The Whitney Houston Funeral Will be Live Streamed 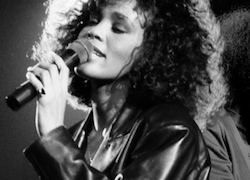 Aretha Franklin and Stevie Wonder are slated to perform at the funeral of Whitney Houston this Saturday, February 18, 2012. Record producer and music industry executive Clive Davis is expected to say a few words. Houston’s Bodyguard co-star Kevin Costner, ex-husband Bobby Brown, and Oprah Winfrey will most likely be in attendance, too.

The services will take place at New Hope Baptist Church in Newark, New Jersey. An estimated 1,500 people will be invited to the private ceremony, while those without an invitation but with a mind to pay their respects will be kept at bay. Newark police say streets within a six block radius of the church will be shut down.

Houston fans who aren’t friends of the Houston family, but who want to view the funeral services shouldn’t try to bypass the Newark police (those ladies and gentlemen in uniform have to deal with enough already). Instead, they should just tune into the event online.

The Associated Press will live stream Whitney Houston’s funeral straight from New Hope Baptist Church by way of the news agency’s Ustream channel. The broadcast will begin at 11AM EST / 8AM PST on Saturday. CNN will have their own live stream the services at CNN.com/live, while FoxNews.com will embed the AP’s stream

If you think broadcasting a celebrity’s private funeral service over the internet seems strange, you’re not alone. But the practice accomplishes a couple things. First, it potentially makes the logistics of crowd control for an event of this size and status a whole lot easier, as people who may want to attend the ceremony can easily watch it in the comfortable confines of their own homes. And second, it gives hardcore Houston fanatics and opportunity, focal point, and means by which to grieve, say their goodbyes, and above all this, wish her love.