What is Felicia Day’s ‘Geek and Sundry’? 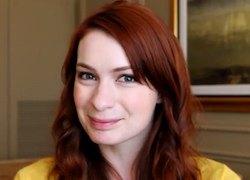 Web series favorite Felicia Day is at it again!

In 2011, Day had great success with the fifth season of The Guild and the debut of her Bioware/ Machinima series Dragon Age: Redemption, but it looks like she has even bigger plans for 2012. On Friday, Day #FF-ed her new company Geek and Sundry. Day tweeted to her followers that the new project will be “bringing you awesome web video awesomeness very soon!” Now, it is no secret that I am a big fan of Felicia Day and her work. The moment I saw this announcement I wanted to learn more. Beyond the description of offering “Eccentricities for your Entertainment,” however, Geek and Sundry remains a mystery for the moment.

The first and only video on the Geek and Sundry Youtube channel is a simple welcome message from Felicia Day herself. Day’s introduction does not give much away about her new project, but she touches briefly about being busy with production and “cool stuff” coming soon. Until the Geek and Sundry site officially launches Day encourages fans and viewers to subscribe to the channel or join the newsletter for early access to videos going online in a few months.

Wait, MONTHS?! I guess Day’s fans will have to wait to learn more about Geek and Sundry for a little longer than “soon.” Until then, I know this fan will be rewatching The Guild and wondering what geeky things Day has in store for the future.