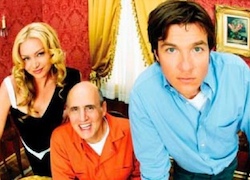 Mitch Hurwitz is the television writer and producer who created Arrested Development, which is the critically acclaimed Fox show that was cancelled after three seasons due to poor viewership despite receiving multiple accolades and awards and developing one helluva following. Hurwitz is also the individual who signed a deal with Netflix in November that will bring 10 new and original episodes of Arrested Development to subscribers of the on-demand internet streaming media provider in 2013 as a prequel to a major motion picture release.

Dean Lorey is the writer for Arrested Development who made an announcement on his blog today that everything Hurwitz signed and said back in November is actually starting to happen. “We’re really doing this thing,” wrote Lorey. “Mitch Hurwitz, Jim Vallely and I are off writing the new season of Arrested to premiere on Netflix in 2013. The original cast is back.”

Arrested Development is one of two high-profile programs making its way to Netflix in the near future. The other is the David Fincher-produced and Kevin Spacey-starring original series House of Cards. Both of them will be competing to win the most viewers in the Television-Quality-but-Distributed-Online Category of online entertainment against upcoming shows from Hulu’s $500 million programming slate.