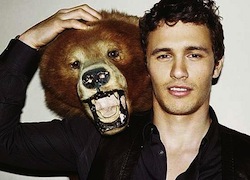 James Franco (apparently) has a web series. It’s called Undergrads and it’s the true story about four University of Southern California coeds (Paley, Calire, Colin, and Keelin) chosen to be in the film project of an aspiring Crispin Glover and have their (presumably at least semi-staged) lives taped to find out what happens when people stop being polite and start getting real.

Or something like that! It actually looks way less like the Real World and more like the handicamed progeny of a coupling between MTV’s Undressed and The Hills.

The online original is produced by Franco and longtime friend Vince Jovilette’s Rabbit Bandini productions. The pair announced the release of the trailer to the series by way of a new James Franco Twitter account, @JamesFrancoTV. Franco hasn’t been public on Twitter since he told Politico “social media is over” back in April 2011.

I know what you’re thinking. And I agree. Iin the catalog of Things James Franco Had Done, you’d expect Releas a Web Series to come after getting a Handful of Masters Degrees but probably before Hanging out With Ke$ha and definitely prior to Host a Seance of Tennessee Williams with a Ouija Board, but this guy never ceases to surprise.

Tune into Undergrads Thursdays at 8PM at JamesFrancoTV.com. And if you want to watch some more online only James Franco vehicles, be sure to check out his acting class.