If you weren’t already smitten with Golden Globe-nominated actor and indie auteur Joseph Gordon-Levitt after you saw his heart get broken in 500 Days of Summer and dreams (within dreams within dreams) come to life in Inception, you will be after you see his skills on a Stratocaster and his ability to auto-tune.

The uber-talented Gregory Brothers collaborated with the 30-year-old actor in their premiere installment of the original web series Songify the News, which is a politics-heavy derivative of The Gregory Brothers’ Songify This series, which is a more secular derivative of their original politically-oriented installments of Auto-Tune the News. (One can assume with the upcoming presidential election and all the C-SPAN footage ripe for auto-tune fodder, Michael, Andrew Rose, Evan, and Sarah Fullen Gregory decided it was a good time to return to the kind of material that made them famous in the first place.) 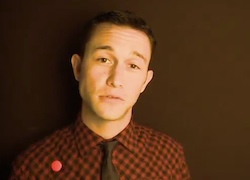 Gordon-Levitt and the Gregory family are accompanied in Get Money, Turn Gay by Vermin Supreme, Jim Stossel, and Newt Gingrich. It’s a great addition to the Auto-Tune catalogue, opens up the promise of other cameos to come, and isn’t the only music video project the traditional film star and online video sensations are working on together.

The Gregory Brothers are also teaming up with Gordon-Levitt by way of HitRecord, an “open collaborative production company” founded by the actor that allows for filmmakers, writers, animators, musicians, and artists of other online compatible mediums to work on building projects together and splitting any potential profits.

The band recorded a song for the second installment of They Can’t Turn the Lights Off, a cartooned web series that highlights the civil liberties and rights (or lack thereof) of Americans. The premiere rallied behind same-sex marriage, while the next episode will discuss the right to record police and law enforcement officers. Look for the release once you help to finish all the animations to correspond with the lyrics.