[Editor’s Note: The following guest post was written by Jamie Cohen, a professor of New Media, Journalism, and Web Television at Hofstra University and Molloy College. His research study is media literacy and video production in multiple disciplines.] 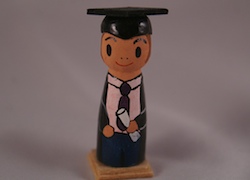 After researching and teaching web television for over three years, I was ironically accepted as a faculty fellow of the Academy of Television Arts and Sciences a few weeks ago. The fellowship was an exploration of traditional television and how it is adapting to the changing landscape of television production. About twenty television professors were accepted in all and all of us were shocked to find that television professionals we met were excited by the changes in the entertainment industry, especially the move to online distribution.

Television evolved simultaneously to the technology that displayed it: the CRT. Yet, unlike other mass media, the technology is currently disappearing and television, the form, is remaining. Television is now an application on a screen. While television professionals, whether from old media or new media, are excited by the limitless prospects of television creation, television academics are just starting to understand the value.

Online Video as an Academic Study

In 2005, when YouTube first opened its doors to the public, the professional community and the academic community largely ignored it. When it became clear that the site wasn’t going away and other sites like Blip and Vimeo were hosting quality content, the discussion of how to integrate the video sites into the classroom became academic conference fodder.

In 2008, I started a class called TV for the Web and web channel for Hofstra University called HTVinteractive and started considering how to teach YouTube as an academic study. I explained and explained to doubtful faculty that we were within a few years of web-based channels competing with broadcast outlets and the television and film students should be at the forefront of the change. I used early web television examples like We Need Girlfriends, Chad Vader, The Guild and Dr. Horrible as examples. These shows were constructed as traditional television with the sole intent to be broadcast on the web. The authenticity of these shows hit at the core of television’s achievements, but they were missing the main part: the attention broadcast shows had.

Broadcast television shows with low ratings are seen by millions of viewers whereas episodes of We Need Girlfriends average fewer than half a million views per episode. Regardless, the lack of views didn’t inhibit WNG’s ability to get professional attention as Darren Star (Sex in the City) found interest in the program.

In another instance, Rob Barnett, the former executive of VH1 and MTV, was well ahead of the curve when he built MyDamnChannel. “This is the last rebel group of show business for the next couple of years,” Barnett said in early 2010, “[web television creators] have five million times more heart than anything else.” While that doesn’t equate to views, it does equate to raw talent, passion, and authenticity – traits found in many television and film students.

Online Video as a Television Network

In May of this year, Blip overhauled its site to resemble a television network focusing of web tv and offered channel customization and a way of “tuning in” to your favorite content. Earlier in December, YouTube unveiled its new layout, a channel based system that focuses on customizing your content viewing and sharing using social networks. 2011 was the year that online television content crossed into the realm of television network – I think the time has come to add web television to the curriculum.

Academics have begun discussing what YouTube’s new goals may be. When the Academy fellows spoke to the old media professionals and network heads, the focus was on the process of production. Each part of the traditional television workflow focused on specific and diverse needs: pitching, agents, showrunners, development, pilots, production, and so on.

In new media television, each content creator is all of these positions. It requires a new type of experienced television professional to know this and it seems that Robert Kyncl and Tom Pickett, Directors of Content Production at YouTube, may know how to find them. According to an article in Adweek, these two are overseeing the large YouTube upgrade and are focusing on partnerships with “promising young talent” as well as “established brands.”

When something is around long enough that seems to have more trial than error, it becomes adopted into academic methods. Of course academe is always a little behind. In this case, YouTube’s bold moves could be detrimental to academic establishments.

Online Video as an Academic Instituion

Earlier this year, YouTube teamed up with the University of Southern California and Columbia College of Chicago and started The Creators Institute and YouTube NextUp “to supercharge creator development and accelerate Partner growth and success.” The Creator Institute utilizes the university education to advance storytelling and production technique. It seems to me that YouTube isn’t just looking to create a full range production company, but also the farmland to grow talent. Academics that have been skeptical of this type of content distribution should pay close attention to these upgrades, as YouTube may become the competition.

On the other hand, YouTube’s new focus can be a boon to academic instruction. Alternative television content and new media programming will not only offer unprecedented access to diverse quality work, but allow students to create an online channel representing their body of work. Creating video content has never been more possible in all of history and academics should be encouraging students to think about making a channel on the new YouTube design and sharing with everyone. Academics are in a great place if they can connect what students are doing on their free time to what they are being taught in class. YouTube is a place to upload their multiple modes of visual expression with a real, authentic audience.

‘Television is now a read/write medium,” says expert Douglass Rushkoff, “We program, or attempt to program, everything we come in contact with.” YouTube has spent years mastering those skills. With proper guidance in schools, the future new media channel executive could be your student.

Jamie Cohen is a professor of New Media, Journalism, and Web Television at Hofstra University and Molloy College. His work focuses on media literacy and video production across multiple disciplines in an effort to create informed citizens and creative thinkers. Cohen is author of a New Media Major at Molloy College as well as the founder and advisor of HTVinteractive.com, Hofstra University’s Web Television Channel. He is also an Academy of Television Arts and Sciences Faculty Fellow.