My Damn Channel Builds Studio Space, Staffs Up for Originals 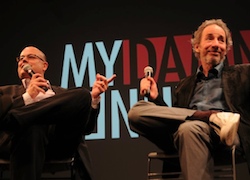 Once complete, the My Damn Channel Studio at the Film Center Building in Manhattan’s Hell’s Kitchen will be home to the upcoming My Damn Channel production of My Damn Channel: Live. The program is one of YouTube’s chosen original channels and will consist of daily 10-minute interactive broadcasts in addition to one full 30-minute installment per week.

If that shooting schedule sounds ambitious, that’s because it is. A check from YouTube helps to cover the production costs, but you still need someone with a helluva internet production pedigree to ensure the creation of a quality live entertainment product, which people will choose to tune into every single day. That someone is Melissa Schneider.

Schneider joined the rapidly expanding My Damn Channel team earlier this month as Director of Production and the Producer of My Damn Channel: Live. Previously, Schneider was the Director of Production at Digital Broadcasting Group (a new media studio and online video distributor that also received one of those YouTube channels), but in the know online video enthusiasts will know her as one of the producers on Michael Eisner and Dinosaur Diorama’s The All-For-Nots and the Nickelodeon web series that never was.

“I’m thrilled to be part of the My Damn Channel team at this time of growth and development,” Schenider said.