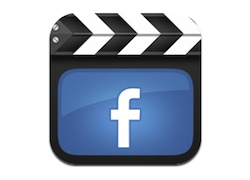 One big news item to come out of comScore’s latest Online Video Rankings is the total US internet audience viewed over 42.6 billion videos in the month of October, which makes for an all-time monthly high.

One predictable news item to come out of the same Online Video Rankings is YouTube maintained its position as the #1 video site across the categories of Total Unique Viewers (160+ million), Videos Viewed (almost 21 billion with a “b”), and Minutes Per Viewers (424.2, which equates to 7.07 hours).

One unexpected news to come out of the Rankings is Facebook’s jump to the #2 spot behind YouTube in that comScore Top 10 List of Total Unique Viewers. The world’s largest social media site saw 166+ million unique visitors in the month of October. Of those 166+ million, 59.8+ million of them watched a video on Facebook. That puts Facebook ahead of its closest competition, Vevo.com, by just under three million monthly views, and in front of the rest of the usual suspects on comScore’s charts by far more substantial numbers. For those keeping score at home, back in September, Facebook occupied the fifth spot behind YouTube, Vevo, Microsoft and Viacom. 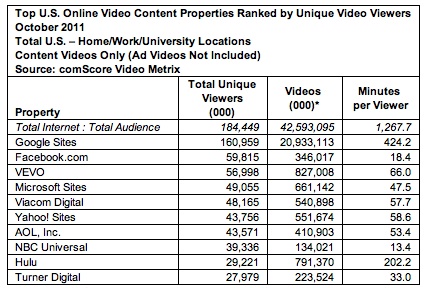 And one more unexpected news item in the Rankings is the Top 10 List of YouTube Partner Channels saw a couple of name changes just a month after the chart appeared almost entirely stable. Schmooru and Warner Bros.’ (powered by The Ellen Show) claimed the #4 and #8 spots with a respective 9.8 million and 7 million viewers, bumping Revision3 and ClevverTV out of the top 10. Vevo, Warner Music, and Machinima still rounded out to the top three spots, with the music video networks account for the lion’s share of the viewers. 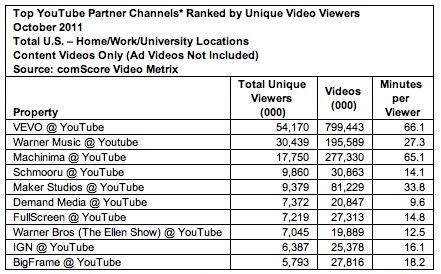 Check out the rest of the movers and shakers in comScore’s October Online Video Rankings here.