Conan O’Brien Asks Lisa Kudrow for Help with His Anger 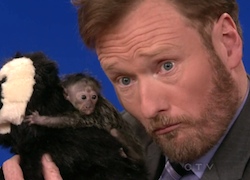 Lisa Kudrow’s LStudio-funded and Intelligent Life-produced original web series, Web Therapy has not only attracted the powers that be at Showtime, but also a bevy of big names in Hollywood.

You can now add Conan O’Brien to the list.

Alex Ben Block at The Hollywood Reporter broke the news the host of TBS’ late night talk show and leader of Team Coco will appear in a three-episode arc of the online original as himself dealing with issues of anger management. The first of the O’Brien installments is set to debut on December 14.

O’Brien is one of many celebrities to appear in Web Therapy’s just launched fourth online season, but the only one that will play himself. Rosie O’Donnell makes an appearance as Wallace’s editor for the therapist’s new memoir, Minnie Driver plays a former child star who wants to play Wallace in the move adaptation of her book, and Natasha Bedingfield act as a “British palace worker” in need of some help.

You can catch the first episodes of Season Four of Web Therapy over at LStudio.com. As for its premium cable television service counterpart, Showtime is still considering whether or not to pick up Web Therapy for a second TV season.