Netflix Spends some of its Billions on ‘Arrested Development’ 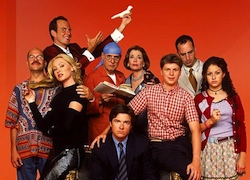 The biggest news in entertainment over the weekend (aside from Taylor Swift taking home the Artist of the Year Award at the American Music Awards and not thanking Kanye West in her acceptance speech) was that an online video platform known for streaming high quality entertainment properties enticed a few household Hollywood names by way of big checks to produce original programming exclusive to said online video platform. And no, I’m not talking about YouTube. That was so last month.

The show’s creator, Mitch Hurwitz, has been teasing fans for the past several months with word of a 10-episode mini season of Arrested Development that will precede a major motion picture based on the Bluths. That major motion picture and the number of episodes that will run on Netflix hasn’t been confirmed, but Hurwitz does promise he’ll be able to wrangle the original cast for all the installments of the series in the foreseeable future.

The news of Netflix launching new eps of Arrested Development follows the announcement earlier this year of the company’s distribution deal for the upcoming David Fincher-produced and Kevin Spacey-starring original series House of Cards. Netflix reportedly ponied up somewhere in the ballpark of $100 million for 26 episodes, the first of which is set to debut in late 2012. The streaming video service is also said to be in talks with the producers of Reno 911! to bring back new episodes of the series Comedy Central cancelled over two years ago.

Netflix’s influx of capital into new and original programming by may be new information to the passive entertainment enthusiast, but it’s something the industry analysts have expected for some time. In fact, Netflix was expected to invest a total of around $1 billion in original programming in 2011 alone.

So, the big question is, what show’s next? (And, I know what you’re thinking, but Cartoon Network already picked up the Annoying Orange.)