15 Seconds to Cartoon Violence and Heartbreaks 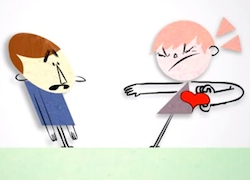 Jim Mortenesen is a storyboard artist and freelance writer for Nickelodeon whose side project, 15 Seconds to Heartbreak, features crude representations of the young human form in frenzied pangs of love-fueled frustration, suffocation, and decapitation. The weekly episodes each depict a scene of unexpected animated injurious physical force that generally ends with the shuffling off of one cartoon’s mortal coil. And, as the name would suggest, all the action tends to happen in 15 seconds or less.

Mortensen’s consistently uploaded weekly episodes since August 27. Aside from the content, the best part about them is the length. As with all uber-short-form original web series, the time investment is minimal.