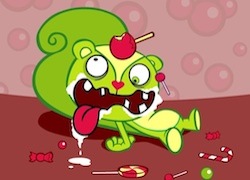 If you don’t know the name Mondo Media – one of (if not) the internet’s “leading multi-platform distributors of animation for teens and young adults” that routinely garners 70 million views for its programs across its many networks – you probably most definitely do know the name of at least one of their original web series productions.

The most notable is the online cartoon Happy Tree Friends, which features a familiar cute and cuddly cast of pastel-colored fluffy anthropomorphic animals with multiple lives, morbid imaginations and violent predilections. They’ve enticed internet audiences to click play since 1999.

Combine those figures with the view counts from Happy Tree Friends and a handful of other Mondo Media YouTube channels (including Guy Collins, Germondo, and Spike and Mike) and the number you get adds up to something well north of 10 figures. That makes Mondo Media one of the latest additions to the YouTube Billion Views Club, joining Clevver Media and a few other choice networks in the upper echelons of online video pervasiveness and popularity.

Check out some quality cartoon programming and add a few more views to those numbers by clicking over to MondoMedia.com or YouTube.com/MondoMedia.