Diablo Cody Inside an Airstream with Celebrities for Lexus 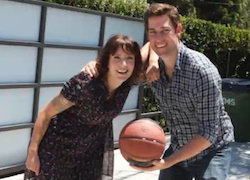 Academy Award-winning screenwriter Diablo Cody has a celebrity talk show web series. It first aired back in July 2010 and is called Red Band Trailer because it’s taped out of Cody’s 19’ Airstream International and the title is a kinda clever play on the film industry term “red band trailers,” which don’t adhere to content guidelines established by decorum and the Motion Picture Association of America. And that makes for a very good analogy for Cody’s interviews. They don’t adhere to content guidelines established by decorum or people like Piers Morgan!

Cody interviews famous individuals like Adamy Brody and Chelsea Handler with (as I said in my original assessment) a healthy mix of non sequitur storytelling and classic celebrity Q&A delivered by way of cute, sometimes too cute, smart and self-deprecating tones.

Unfortunately, you can’t currently find the Brody chitchat, or the one with Handler, or any of Cody’s Red Band Trailer interview from season one of the program anywhere online. Fortunately, that’s because Lexus’ LStudio picked up the show and just debuted a start-studded sophomore season.

Here’s John Krasinski and Cody in the season premiere, discussing molten gold in the zeitgeist and paddle ball with New Kids on the Block:

It’s not as entertaining as Krasinki’s campaign with Alec Baldwin for New Era Caps, but that doesn’t mean it ain’t worth watching. Stay tuned to LStudio for more.