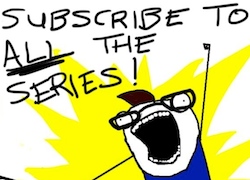 Blip.tv, the online video platform of choice for the creators of more than 50,000 original web series, recently gave its destination site a major overhaul. The blip.tv team’s intent with the new diggs was to provide a more easily navigable home for its featured programming, encourage more viewers to watch more of that featured programming by marketing it on site with more enticing artwork and better editorial decisions, and basically modernize its previously mid-2000’s aesthetic.

Now, to go along with its new site that was a few years in the wanting, blip.tv’s added a feature the website always should’ve had since its inception. Subscriptions. Viewers will now see big blue “Subscribe” buttons “just about everywhere on blip.tv.” Click, allow blip.tv to integrate with your Facebook profile, and you’ll be notified via e-mail whenever new episodes of your subscribed-to shows are available.

It’s obviously nothing novel, but the subscriptions feature is kinda like replacing a mediocre website with one that’s most definitely way better than mediocre. You don’t need to be an online video analyst to know it can only positively effect views, consumption, and users’ overall satisfaction with the service.

To market its new subscription option and get consumers of video content to use the feature, blip.tv’s very own Director of Network Programming / Online Video Content Guru Eric Mortensen will be making personalized recommendations all day today. If you’re in need of one, simply send a tweet with #ILoveBlip, mention the name of your favorite TV show, and Eric will hit you back with at least one web series you should most definitely watch.