One Billion Music Videos Viewed on YouTube Every Month 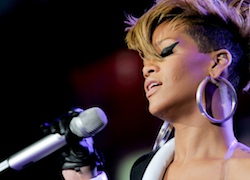 People watch a lot of music videos on YouTube. If you check out the most recent comScore numbers, you’ll learn why I italicized “lot” in that last sentence.

According to the latest release of the marketing research company’s Video Metrix product (which, since last month, measures and analyzes the audiences of YouTube’s top partners), the YouTube channels organized under the umbrellas of Vevo and Warner Music collectively accounted for 985 million video views in the US in August alone. Vevo makes up 80% of that almost-10-figure mark with 788 million video views, while Warner accounted for 197 million video views throughout the month.

If that number doesn’t seem impressive yet, it will after you read this next stat. Those almost-a-billion video views equal more than twice the amount of video views received by all the other channel groupings in comScore’s Top 10 YouTube Partner Channel Chart combined. Machinima, Maker Studios, Demand Media, Revision3, the Associated Press, ClevverTV, FullScreen (which is a new addition to the Top 10, bumping off Next New Networks) and IGN collectively accumulated roughly 486 million video views in the same 31-day period. Check out the numbers: 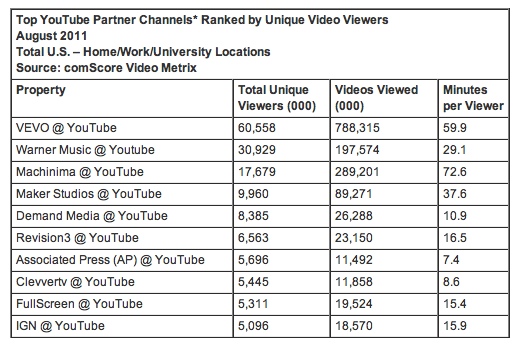 The popularity of the music video genre definitely has a a lot do with the fact American music has more or less a universal appeal and language barriers don’t prevent consumption nearly as much as they do for other types of online video programming. Plus, the videos are generally very well produced, individuals click play to hear the lyrics just as much as they click play to see the moving pictures, and consumers can easily tolerate, and even enjoy multiple viewings.

To find out what else the 85.8% of the US internet audience that consumed at least one online video last month really liked, check out comScore’s other Top 10 charts for August 2011 here.