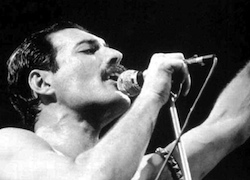 Monday, September 5, 2011 wasn’t only the last day women can wear white in the presence of Anna Wintour without feeling less than until the Spring equinox, it was also the birthday of one of the greatest musicians to ever live and second-most famous Zoroastrian (behind Zoroaster) of all-time.

Freddie Mercury would’ve been 65 years young this year. Google celebrated the occasion with a particularly pretty, cool-toned, pastel-colored collage of a Google Doodle with soft drawings of Mercury in larger than life poses throughout various stages in his career. An animated video accompanied the image, conceived by Google Doodler Jennifer Hom and featuring a sometimes 8-bit Mercury, Queen, and screaming fans flashily enacting a rendition of Don’t Stop Me Now, a greatest hit of Queen that Mercury wrote.

The video’s fantastic, but it has something in common with previous video accompaniments of Google Doodles celebrating famous celebrities’ birthdays. There’s no view count. Kinda strange, right?

Google’s uploaded at least 1,380 videos to its official YouTube account. That includes everything form tutorials on how to add a picture to Google Images (currently at 14,484 views) to lessons on how to search the stars in Google Earth 4.2 (currently at 21,046,486 views). Out of all those videos, only Charlie Chaplin’s and Freddie Mercury’s B-Day celebrations don’t list the view counts.

Obviously Google doesn’t want users to know how many people visit Google.com and click on the Doodle. But why? Google commands and impressive 65% of the search engine market and YouTube gets almost triple the total unique viewers of its next closest competitor. What’s the big deal about possibly revealing a little bit about the clickthrough rate for an image on Google’s homepage?

Your guess is as good as mine. Listen to one of the world’s best vocal talents ever and then let us know what you think.