Who Should Win the Worst Governor Ever Award? Vote Now! 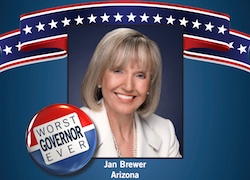 Governors are sometimes the worst! Amiright?!? From eliminating collective bargaining rights for public employees to enacting gun bills that may or may not be less stringent than the ones enforced upon Doc Holiday, the elected leaders of the states of our union can be responsible for some pretty terrible things.

But which elected leader of which state in our union is more terribler than the other? Unfortunately, there are a lot of really good/horrible candidates. But that’s why Al Gore invented the internet before he invented global warming, so we can answer such questions by way of tragically comic awards.

The Transport Workers Union of America created the Worst Governor Ever Award in conjunction with the Workers’ Rights are Human Rights campaign to expose the “extreme agenda of reactionary governors and let Americans send a message to the governor of their choosing that he or she is the worst governor ever.”

It’s not really but kinda sorta like Stephen Colbert’s Making a Better Tomorrow, Tomorrow Super PAC or Jon Stewart’s Rally to Restore Sanity. The TWU created an entity that focuses on bringing serious but often overlooked and underoutraged political issues and morally suspect individuals to the forefront of political conversations by way of putting those political conversations in a new and engaging context. A lot of individuals watch C-SPAN as an alternative to Ambien and not everyone reads Paul Krugman. An award like this and online videos like these make for far more effective ways to engage those individuals in political discourse and educated those individuals about political issues.

Aside from the videos, the best part about the Worst Governor Ever project is the ability to send your selection an immediate email correspondence noting how you voted him or her for the title. Geinus, fun, and (hopefully) effective.

I caught up with Mary Matthews, the Transport Workers Union of America’s Interactive Media Producer/Director, to ask her about the initiative and how it all came to be:

Tubefilter: Tell me the genesis of the Worst Governor Ever award.
Mary Matthews: We were sitting around talking about all these governors, their war on workers, the middle class, the poor, etc. and literally could not figure out which one of them was the worst governor ever. Originally, I thought of it as a one time video, but the TWU new media department worked together to develop it as a campaign where people could vote, social network their vote, and contact the governor directly they voted for about why they voted them Worst Governer Ever.

TF: Is this the first project like this the TWU has done?
MM: Yes. This project is in connection with TWU’s long-term Workers’ Rights Are Human Rights campaign, which directly addresses these attacks happening across the country on the middle class and working families by way of direct actions, workshops, summits, and all kinds of efforts to bring workers to this movement and the movement to the workers.

The Worst Governor Ever campaign is a direct connect, engaging people to vote, participate, communicate their displeasure with their leaderships and make their demands for change.

TF: You don’t usually see unions use a little comedy to promote initiatives or bring attention to political issues. Have you seen any other unions do anything like this?
MM: I’m not aware of any union making a humor campaign such as ours, but here is nothing funny about what these governors are doing to dismantle workers right, working families and communities at large.

A budget is a moral document. It shows us what we value as a society, what we hold most precious and dear as a people, a community, a nation. These governors have cut millions of dollars in education, healthcare, transit and basic infrastructure that keeps this country running every single day. When you put all the crazy legislation and polarizing politics together in one place, as you see in the Worst Governor Ever videos and on the Worst Governor Ever.com site, it is completely absurd.

By the way, TWU had a much more serious approach in another video, Dear Governor, which addresses the same issues but very differently.

TF: What’s the response been from the people in the TWU?
MM: The response has been great, within our own union, in labor at large and with the American people. Thousands of votes continue to pour in. We have gotten some great press coverage, especially at state level, where press is covering these specific governors. They all want to know where their Governor is in the polls. We were also featured on the main page of MoveOn.org.

This is a very passionate subject, nation wide, and it has really tapped in to the competitive nature of folks as well. They really want THEIR Governor to be the Worst Governor Ever.

Rick Scott’s (FL) communications director e-mailed us a direct response with questions re: Rick Scott’s merits as a Worst Governor Ever contender, which we answered and then never heard back from them again. The Pink Slip Rick campaign has partnered with us, in addressing Rick Scott of Florida’s terrible attacks on working Americans.

Tubefilter: What’s your end goal here?
MM: We have created a place online for people to go to express their passions and concerns, with not only a vote, but an opportunity and means to connect directly to these governors,  to express their disappointment and displeasure with their leadership, or lack there of. The Worst Governor Ever Facebook page has quickly become an ever-growing community of folks sharing information, links, personal stories of the fight for working families and the middle class.

But what’s our ultimate goal? To finally determine once and for all who is the Worst Governor Ever, as determined by the American people themselves.

Help the TWU accomplish their goal by casting your vote for the best/worst governor at WorstGovernorEver.com.