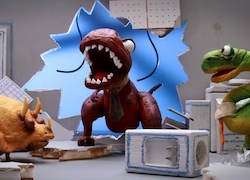 Paul Greenberg started his position as CEO of CollegeHumor roughly 10 months ago. Since then, the former President of the Digital Lifestyle Group at Time Inc. and Executive Vice President and General Manager of TV Guide Digital has been devoted to expanding the audience of the 12-year-old online comedy destination for university coeds and post-college kids by distributing its video content on platforms, devices and destinations other than CollegeHumor.com.

“We’re making sure we’re reaching our audience wherever they are,” Greenberg said during a phone interview. And that audience especially includes owners of the new Nintendo 3DS.

“We’ve always respected Nintendo a lot, and worked closely with them as advertisers and partners,” Greenberg explained. “I reached out and spoke to the head of content of North America, and they felt like our audiences made for the perfect cross over. We got such a great comedic sensibility and we really understand the male 18 to 34 audience. Creating content for the 3DS seemed like a terrific way to do business together.”

The home of original web series hits like Jake and Amir, Hardly Working, Troopers, and more will develop five web show pilots, each of which will premiere in two dimensions online and and three dimensions on the 3DS. Nintendo higher-ups will then choose which pilot they like the most and the selected pilot will be developed into a full-fledged (at least) six-episode web series.

“A lot of our videos on CollegeHumor have special effects, but the ability to take it further and really take advtange of the 3D is amazing,” Greenberg said. “It’s more than ‘Hey, there’s a punch coming out at the screen.’ You can really see the layers, especially in the animation and live-action combinations.”

Two of the five pilots are currently live, online, and in 2D now. Dinosaur Office is a kind of Mesozoic claymation Office Space and Pizza Quest! looks like a partly animated version of Scott Pilgrim vs. the World that takes place inside a New York City pizza parlor. (If you’re the proud owner of a Nintendo 3DS, you must let us know in the comments how the 3D versions look on the 1.6 billion pixel per second dual screens.)

The new series for Nintendo add to an already prolific CollegeHumor production slate. The studio produces about 15 to 20 original videos per week, which are watched by over 15 million unique monthly viewers at CollegeHumor.com and huge audiences on YouTube and Facebook.

Gaming consoles, other third party devices, and wherever else potential audience may be is a logical next step for the websites’ programming. Expect to see CollegeHumor content near you on a gaming device or tablet in the near future.