Machinima released the final installment of the Warner Bros. Premiere produced and Kevin Tancharoen directed 9-part Mortal Kombat: Legacy original web series on Sunday. The latest episode was more than a month behind schedule. Tancharoen told the audience at his panel at San Diego Comic-Con the delay was caused by the need to put the finishing touches on the Cyrax and Sektor fight scene, but my guess is the ability to give his panel a super special premiere of the finale factored into the decision making process.

Regardless, MK: Legacy and its anthology of superhero and supervillain creation myths brought to real-action life is now complete, which makes now a good time to answer the question I asked four months ago. Did the series sustain its audience? Let’s take a look. 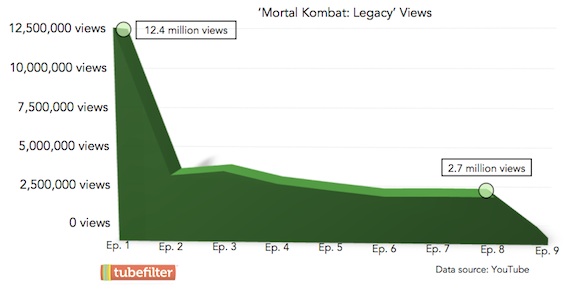 The MK:L premiere did phenomenally well, as well-hyped, well-marketed web series premieres are apt to do. At over 12.4 million views and counting, it’s received more than 3 times the view counts of its next most popular installment, Episode 3. That installment currently clocks in at 4.1 million views, up 6% from Episode 2’s 3.9 million.

The viewership of each episode declines at a near steady rate of 10% to 17% after Episode 3, until the views flatline at around 2.7 million for Episode 6 and beyond. I’m dubbing that 2.7 million number Mortal Kombat: Legacy’s Base Audience. If Tancharoen were to keep directing installments of the series indefinitely, and if Machinima were to continue to distribute them, it’d be safe for Warner Bros. Premiere to go to advertisers guaranteeing, at a bare minimum, 2.7 million views per episode.

(I realize the number of views for a particular episode will only rise over time, but now is a good time to measure audience. Episode 6 debuted back on May 16th. That’s over one month after the premiere, which makes for enough time for all the media hype and coverage of the initial installment to die down. The viewership numbers are therefore no longer significantly inflated by marketing and PR efforts. May 16th was over two months ago, too,which is enough time to account for latent fan discovery of the series.)

(I also realize 2.7 million is the lowest number of views any episode of the series has received, so it’s easy to say that number is the baseline audience. But MK:L never dipped, it flatlined. That usually doesn’t happen in web shows, especially ones that are only a handful of episodes! Which leads me to believe the number represents some semblance of the series’ true audience.)

But what’s more interesting than discovering a Base Audience for MK:L is noting how that audience has become more engaged over time. 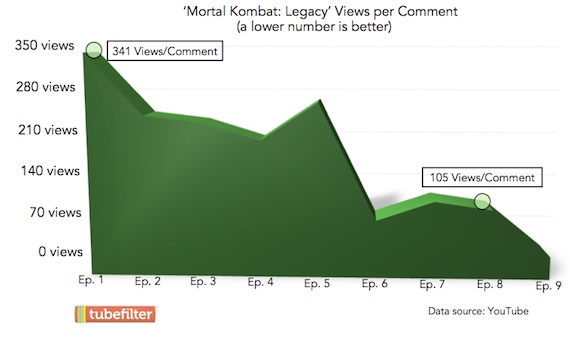 Episode 6 of the series has received over 30,000 comments so far. That’s second only to Episode 1’s 36,000 comments. But Episode 6 received only one-fifth the views of Episode 1. That’s a lot of heightened engagement! In fact, the last five episodes of MK:L have over twice the engagement per view of the first five episodes. Less viewers are commenting way more often. The question is why?

It’s tough to say, but it’s a sexy metric. One that (along with the Base Audience of 2.7 million and the 35+ million total views the series has received) Warner Premiere and potential advertisers are sure to note should Mortal Kombat: Legacy II (hopefully) be in the works.