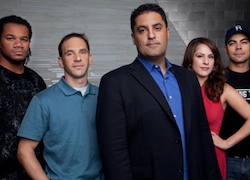 The Young Turks uploaded its first video to YouTube on December 25, 2005. The liberal-progressive and self-proclaimed “first internet TV news show” was created by Cenk Uygur (here’s a videoif you need to learn how to pronounce that one), Ben Mankiewicz, Dave Koller, and Jill Pike and born out of a defunct Sirius Satellite Radio program of the same name. It’s done much better online.

In the five years, six months, and couple of weeks since the program found a new home on the internet, The Young Turks has uploaded 9,450+ videos, accumulated 250,000+ subscribers and just recently received it’s 500,000,000 view. In that time frame, Uygur also landed a hosting gig at MSNBC while Uygur and company turned The Young Turks from one left-of-center news show into a brand that now produces no less than six regularly scheduled original web series, employs 12 full-time staff members, and sees revenue upwards of $1 million per year (a threshold Uygur tells me the company stepped over eight or so months ago).

Tubefilter: You have a regular gig now on MSNBC. A lot of people in the online video world would consider that the end game, a sign that you’ve made it. So why is The Young Turks still up and running online?

Cenk Uygur: The Young Turksis the main show. The network is averaging over a million views a day. Just from a financial perspective – let alone the ability to get our your message and do something you love – you’d be crazy to stop the program.

TF: How does MSNBC feel about that?

CU: Whenever I talk to any TV executive, I say stopping The Young Turks is non-negotiable. I think the oldschool way of thinking is if you’ve made it onto TV you’ve made it. I’m not a believer in that oldschool of thought. I think online is going to be bigger and I’d much rather hold onto my online show than get caught up in dreams of television stardom.

TF: What’s the relationship like between you on MSNBC and The Young Turks? Is there any synergy there?

CU: Sure, but they don’t work together much. We promote MSNBC on The Youg Turks. We promote The Young Turks a little bit on MSNBC. We haven’t coordinated anything at this point in a significant way. So far they’re fairly distinct.

TF: Are you seeing fans cross over from one medium to the other?

TF: Do original Young Turks fans get bragging rights since they liked you before you were on TV?

CU: Ha. I think people feel a little proud that they’re able to say, “We were TYT fans before Cenk was on TV.” Definitely. There’s a point of pride there.

TF: You said you’re getting a million views a day across all your online shows, but I know you also generate revenue through TYT Memberships that give subscribers access to special content. How’s the revenue breakdown between those two revenue streams?

CU: The lion’s share of revenue comes from YouTube. The subscribers get access to audio and downloadable podcast versions of everything we do. They’re really paying for convenience and the ability to watch or listen without the ads. About one-third of our revenue comes from those subscribers. The other two-thirds comes from advertisers and YouTube.

TF: You used to also produce a supplemental radio version of The Young Turks’ online show. What happened to that?

CU: The radio portion really was not worth the hassle. The online show is so much easier. People used to think of the online part as the add-on. Now, I think online is the real deal and the other things are the add-on. We decided with radio that it wasn’t worth it unlike being on TV, which so far we feel has totally been worthwhile.

We really want to be the preeminent online TV network or video network online. We want to create a brand. Our brand is honest truthtelling. We don’t suck up for access or for money or for advertisers. We keep it real, whether that’s in politics or entertainment or sports, and I think our audience appreciates that.

Check out Uygur and company keeping it real across their network of shows at TheYoungTurks.com.