Endemol, KIDZ BOP on the Hunt for the Next Bieber

When you put yourself out there on the internet, beware. You will be judged. If we’ve learned anything from Rebecca Black, it’s that hurtful comments, parodies, and legal troubles can accompany any young teen’s innocent attempt to attain online notoriety. 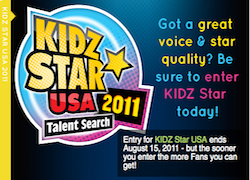 But it’s different when a kid attempts to attain that online notoriety through KIDZ BOP. Like Sesame Street Online and other internet destinations for barely and pre-teens, the #1 kids’ music brand in the United States has made great efforts to create a safe, positive community for youngins and shield them from trolls and highly negative reactions.

That’s why parents can feel totally okay about their kids entering into the second annual KIDZ Star USA Talent Search. It’s a nationwide contest soliciting 90-second submissions from kids with musical talent to find the next tween superstar.

The talent competition, accepting submissions until August 15 and open only to kids and teens ages 15 and under, gives aspiring performers a chance to compete for  a recording contract with the RCA/JIVE Label Group and a starring role in the next KIDZ BOP TV commercial or music video. Top contestants will also be featured in an original series from Endemol (a production company that’s no stranger to reality programs on the web) that will showcase  the kids’ journeys on their way to find out who will be the next KIDZ Star USA.

“KIDZ Star will be an amazingly interactive and engaging video series and community which will create a co-viewing experience for kids and their parents, and we are extremely excited to find the next great KIDZ Star,” said David Armour, VP of Digial Programming for Endemol USA. “This project further solidifies our position as a leader in interactive transmedia programming and development.”

A quick look at the contest videos reveal only positive feedback is encouraged. Users can “fan” and entry, and give some colorfully illustrated “props” like “What a voice!,” “Rock on!,” and “I heart it!” Comments are enabled, but to leave a comment you must be logged in, and are subject to a three strike policy. Last year, the contest garnered over 35,000 submissions.

A yet to be announced panel of celebrity judges will mentor contestants and help select the winners, along with fan voting to determine the semi-finalists and Grand Prize Winner. The finalists be flown to New York City where they’ll receive a superstar makeover as a part of their “red carpet treatment, which may be the most important part. As we’ve learned from internet come-upper Justin Bieber, a good haircut can go a long way.