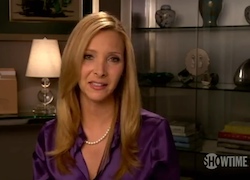 Web Therapy is having a good run. The original web series from Lexus’ LStudio is scheduled to make its television debut on Showtime July 19. Its star, Lusa Kudrow recently hosted the Webby Awards and received a digital media award at the Banff World Media Festival. And FremantleMedia Enterprises just picked up its international distribution rights.

The division of the company that’s home of such productions as American Idol and rights holder of quality programming like Price is Right announced today it acquired the privilege to distribute Web Therapy worldwide outside of North America.

Kudrow created the online original along with Dan Bucantisky and Don Roos. Here’s what she had to say about the news:

What’s thrilling for Don, Dan and I is that this half-hour version works as well as it does…It’s not like any comedy we’ve ever seen on TV before and it started as a creative experiment which makes this very fulfilling.

Expanding a three-minute short into a 30-or-so-minute television program must be the most difficult part of transitioning from the web to TV. It’ll be interesting to see if Web Therapy preforms in this longer format as well as Kudrow thinks it will. Tune into Showtime at 11PM EST on July 19 to find out.