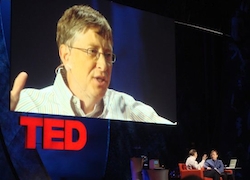 500 million online video views in five years is an impressive stat for any content producer. But it’s even more impressive when only about 14% of those views come from YouTube.

Five years ago today, the TED Talks website went live, giving audiences without the cash or the resume to attend the high-profile, highly exclusive Southern California TED conference the ability to watch presentations about orgasms, synthetic life forms, spaghetti sauce, and other things important and ephemeral from the comfort of their computer screens.

In an interview with Sarah Kessler at Mashable, Director of TED Media June Cohen notes how TED initially embraced the web for the same reason a lot of other independent content creators flocked to the medium. Traditional media said “No.” “When the BBC told me that TED Talks were too intellectual for them, I thought it was time to change strategies,” Cohen said.

975 TED Talks captured on camera and uploaded to the web later, and the content Cohen claims was wearing pants too smart for mainstream media has seen a cumulative 500 million views. 250 million of those views have come in the last year alone. And only 70 million from YouTube.

The TED Talks channel on the world’s largest video sharing site accounts for only 14% of TED Talks’ total view count. The other 86% comes from what Ryan Lawler at Gigaom describes as an open strategy to distribution. TED Talks are available on the TED website, a variety of other online distribution channels (like iTunes and Hulu), as well as new video viewing platforms and devices (like iPad and Roku). Lalwer also says how the high view counts may have something to do with TED appealing to a global audience. The conference’s crowdsourced subtitle program launched in 2009 and allows for the (mostly) English-only talks to be translated for viewers around the world.

There is also no Evolution of Dance of TED Talks. No single video accounts for more than 2% of the total view count. Sir Ken Robinson’s Schools Kill Creativity presentation and Jill Bolte Taylor’s story of what a brain scientist does when she gets a stroke (she makes lemonade) are the only two videos with more than 8 million views. You can check out the rest of the Top 20 Most Viewed TED Talks here, but just make sure you have some time on your hands. These ideas featured are not only worth spreading, but very difficult to stop watching.