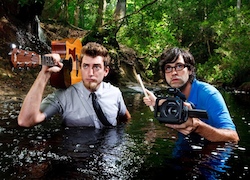 Rhett McLaughlin and Link Neal are the comedy and online video duo Rhett and Link, responsible for sweet stop-motion shorts, music videos about internet culture, and local public-access-style television commercials, advertising the businesses that would otherwise not be advertised.

McLaughlin and Neal’s I Love Local Commercials original web series puts the pair in the position of a kind of pro bono Crispin Porter + Bogusky, traveling across the country to visit small local businesses the advertising industry has overlooked and make for them innovative and often times absurd online video marketing materials.

They’re great, right? IFC thinks so, too. Tonight, the cable channel debuts the season premiere of Rhett and Link: Commercial Kings. The television program is a 10-episode “docu-comedy” where cameras follow McLaughlin and Neal as they embark on their journeys to make good commercials for local business using local talent. Some of those local business include “a training facility called Make Me a Pro Wrestler, a spa for colon care called Fountain of Health, an eco-friendly burial service called Bury Me Naturally,” and Da Spot Hair Studio, a salon looking to diversify its predominantly African American clientele.

Each commercial creation story involves three distinct parts: 1) we hear the business owners vision of his or her business, 2) we see the commercial production, and 3) we witness the Move that Bus! reveal.

Jon Caramanica at the New York Times finds a few faults with the series and accuses McLaughlin and Neal of making “the commercials of their own dreams, not the client’s.” I can see his point. There’s a fine line between making fun of and celebrating an idiosyncratic individual and McLaughlin and Neal will most certainly, at times, step over it. But if their online videos are any indication, they applaud more than they mock

Watch and draw your own conclusions every Friday on IFC at 10PM EST and join McLaughlin and Link for live chats on YouTube at 10:30PM EST after the show. Rhett and Link fans also know this isn’t the duo’s first television appearance. McLaughlin and Neal played hosted on the short-lived CW series Online Nation in the Fall of 2007.