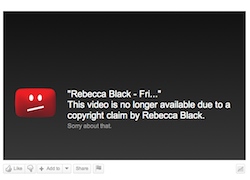 Black escalated her custody battle over the rights to Friday with the LA-based vanity record label ARK Music Factory by requesting YouTube take down her hit single. It’s the latest major move in a months-long complicated legal struggle over the song. Eriq Gardner at The Hollywood Reporter wrote an excellent breakdown that basically boils down to this:

Rebecca Black and her mom went to ARK Music and paid the studio some nominal fee to use their recording facilities and production capabilities to create a music video. Black allegedly never received her master recordings of the track and ARK allegedly never received the right to exploit the song in all the forms its currently doing so (via YouTube, ringtones, paid downloads, etc.). All this wouldn’t normally be an issue, but of course Ryan Seacrest took Black under his wing, the song went gangbusters, Black now appears in the music videos of big name pop stars, and everyone wants a piece of Friday.

If you’re savvy, you can still find the music video online. Or, if you need a Friday fix, there are plenty of parodies to hold you over until the rights issue gets resolved. My favorite involves Hitler not patryin’, partyin’: