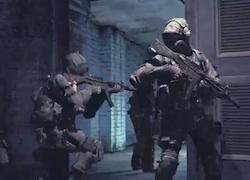 E3 and its flurry of press announcements doesn’t officially start till next week but that stop the gamer chatter from flowing early. Looks like Activision’s super franchise FPS Call of Duty is set to launch a premium subscription service called Call of Duty Elite later this year coinciding with the November release Call of Duty: Modern Warfare 3. And with it comes a members-only web series.

The monthly subscription fee—the amount hasn’t yet been announced—will give members access to in-game bonuses and features like clans and tournament play. But the real kicker is an online episodic narrative series that is being developed with some also-to-be-announced talent attached.

“We have engaged some top Hollywood talent to create linear video content that will be exclusive to Elite members,” Activision Publishing chief executive Eric Hirshberg told the Guardian. “That content is inspired by Call of Duty.

“If you’re a sports fan, there are lots of ways for you to connect with that hobby, that passion, not just on the day that the games are played, but throughout the week, and we wanted to give [Call of Duty players] real entertainment value,” Hirshberg added.

There are two ways Activision could go with this series—either sticking with the already stunning visuals of the game itself and and shoot it using the Theater Mode as a pure machinima series. Or, it could take the live action adaptation approach, much like Mortal Kombat: Legacy has done with some eye-raising success. Video game fans have taken a liking to both ways, with the machinima web series prequel for Assassin’s Creed driving some real numbers for Ubisoft.