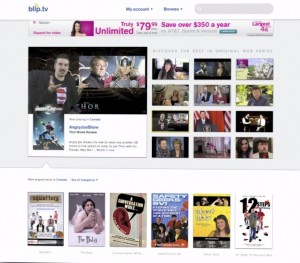 Its website has never been one of blip.tv’s strong suits.

The online video hosting, distribution, and advertising network of choice for thousands of creators of online original series has done a lot of things very well since its launch way back in 2005 – including helping to create an online video ecosystem that has the ability to elevate independent content creators from the level of amateur to professional, splitting video advertising revenue 50/50 with those content creators resulting in hundreds of thousands of dollars paid out to them and their web series every quarter, and raising upwards of $18.3 million in funding – but creating an intuitive, easily navigable destination site that showcases all of blip’s excellent programming hasn’t been one of them.

That changes today. Blip.tv just debuted a new blip.tv that aims to be a discovery tool for the “best in original web series.” It’s pretty. And it looks and feels a lot like a Hulu for online originals, but there’s more to it than that.

Research and Testing Provides Cures for Paralysis of Choice

Blip spent the better part of last six years positioning itself as a resource and home for independent content creators. Because of that, the company’s accumulated a helluva lot of content, the quality of which has only increased over time. But blip wasn’t doing as good a job as it could at showcasing that content. The traffic at the site is substantial, but the powers that be thought it could be much better if more viewers had easier access to blip’s high quality programming.

The company knew it needed a new website, but it also knew in order to create the best website possible it needed to understand its current and potential audience.

So, what do you do when you’ve received over $18.3 million in funding and you want to conduct market research? You go to the best communications strategy firm in the business, Maslansky Luntz + Partners (the same guys and gals that coined the term “climate change” and work with international corporations like these ones).

Blip worked with Maslansky Luntz to identify the entertainment likes, wants, and needs of current and potential online video viewers. The results directly influenced the design of the new blip.tv. For one, the phrase “original web series” resonated better with all demographics than any other descriptive term tested for the type of content you’d find on blip (and that’s why you see it used around the site). And for two, the research gave a strong indication of what current and potential consumers of original web series are looking for.

“We asked people how they discover content,” Mike Hudack, CEO of blip.tv explained, “And what we found out was chaos and algorithms don’t work very well. People want a curated experience. Their perception of web video is there’s a ton of it and they don’t know how to find the good stuff. The people we surveyed don’t want to be spoon fed their choices, but they want to be told what’s good.”

Basically, individuals suffer from a paralysis of choice. So, blip is trying to make those choices easier.

Hudack and blip.tv Co-Founder Dina Kaplan told me content creators have uploaded roughly 50,000 original web series to blip. Of those 50,000, only 1,800 or so are currently featured on the company’s new destination site. (You can still reach the blip pages of those other 48,200 shows through direct links, but you won’t be able to find them by going to blip.tv.)

Blip’s editorial staff of eight employees and growing makes sure all the web series on the new blip.tv work, but how does it make its decisions?  What does it take for your web series to get noticed from blip’s content curation team and receive their blessing to be placed on the site? A few things.

Blip.tv isn’t only curating content for the new blip.tv, it’s doing its best to makes sure the medium is perceived as professional. The new site was designed to be aspirational for content creators as much as it was made to be a discovery and viewing platform for viewers. That’s why only great looking shows, conceived with some thought behind them, and released on a regular basis will be featured. The company wants to encourage and show other content creators what it takes to make professional-grade entertainment.

But how does blip watch all of its 50,000 shows to figure out which ones are good? Well, it doesn’t.

“Huge view counts are obviously hard to ignore,” Mortensen told me over e-mail, “but it’s really less about specific numbers and more about momentum.  If we see a show on the move, we want to work with it, whether it’s currently getting 5,000 views per month or 5 million. Our internal systems here at blip help us find shows where there might be some movement. The key word is might. Software has gotten very good at telling us if something might be worth watching, but only a human can know for sure.”

So, Mortensen and crew get tipped off to great original web series through bilp analytics and communicating with content creators. But what happens when they find a show that’s good?

When a show gets called up to get showcased on the new blip.tv, it must create a number of pieces of art for its blip.tv page. That includes a show poster and other images to entice viewers to hit play and enhance the site’s overall professionalism.

“The artwork is all part of elevating the status of the medium,” Kaplan told me. “We want to get away from the idea of professional content vs. User-Generated Content. There are thousands of true professionals on blip and this new artwork is a great visual representation of that.” 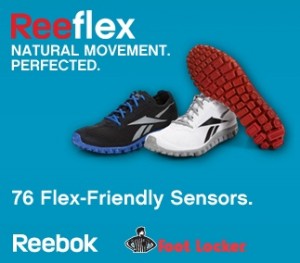 Blip.tv signed T-Mobile as its headline sponsor for the kick off of the new site (you can see the drop down ad up top when you go the homepage) and inked a deal with Reebok to advertise across the site’s Health and Fitness category (which is one of 16 verticals in which the shows on blip are now organized).

Hudack wouldn’t divulge any sales numbers, but he did say blip.tv is poised to deliver 1 billion (with a “b”) video streams a quarter. Now, if you’ll excuse me, I have to go contribute a view or two to those numbers.