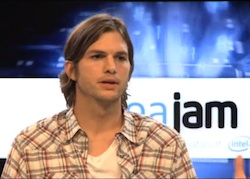 Ashton Kutcher is a man full of ideas—and to that, he also knows a good one when he see it. Back in February, the actor and entrepreneur dropped by the LA edition of Startup Weekend, a 54-hour no-sleep grindfest of tech entrepreneurs tasked with taking an idea from concept to launched startup in just one weekend. Out of it came some pretty clever products, like Zaarly, that Kutcher himself backed along with other investors.

That got Kutcher and partner Jason Goldberg and their team at Katalyst thinking. Could this same format be done with online video content ideas? That’s when they looped in a major sponsor, Intel, and came up with IdeaJam, a 48-hour event held April 1-3 with 48 digital filmmakers forming six teams tasked with pitching, creating, adapting, building, devising, and editing their ideas under the over-arching “What Inspires You?” theme. Now video from the event, shot documentary style, is released on IdeaJam’s YouTube channel showcasing how these teams pulled together some pretty captivating work.

Many of the participants are known to Tubefilter readers for their work in online video, like Rob Polonsky of ChadMattandRob, Leyna Weber and Annie Lukowski of Working Bug and Japhy Grant of Foodies.

Juding the competition were Kutcher and Goldberg (Katalyst co-founders), Chad Hurley (YouTube founder), Erin McPherson, Head of Yahoo! Video Programming, David Janollari (Head of Scripted Development) and Guy McCarter (Managing Director, Greenroom Entertainment). While the winner has already been announced—it was Greg Burke and the “Crash My Pad” team (see his pitch below)—it’s still worth watching the full series to see just how these ideas evolved. The “Crash My Pad” concept won the $20,000 prize and a producing deal with Katalyst to further develop and release the series.

“It was an exceptional experience surrounded by inspirational peers under the guidance of Ashton Kutcher and Jason Goldberg,” Weber told us about her ‘Match My Date’ project. “They were immensely helpful. We were in our element. Even though the deadline was tough, we often impose insane deadlines on ourselves, so it was familiar. We thrive on this.”

“The idea blossomed throughout the weekend. The first pitch involved the ability to match up friends ala how one one can endorse people on LinkedIn,” added Weber’s partner Annie Lukowski. “It evolved with the addition of a reality show component — adding a live stream to the experience, so the date would be viewed by the public. This added a voyeuristic element of fun to it and the incorporation of social media. Our outstanding editor, Pascal Leister, pulled an all-nighter, making changes up to the last minute. It was an all-hands on deck effort.”

The live stream of the first IdeaJam netted 24,000 viewers on Ustream according to Katalyst. “When we’re producing it we think it’s important to engage the audience,” Kataylst President Anthony Batt told us. “We believe as a company that we want to turn viewers into users. So we want viewers to be involved in the process of telling the story.”

“It was such an awesome learning experience. To be creating 48 hours straight with very limited resources and no budget really gets you thinking outside the box — the way we should be thinking always!” Polonsky, who headed up the ‘Alibuys’ team told us. “The idea started off as a web series which evolved into an actual company we created. We dreamed bigger. Took the idea and stretched it as far as the imagination could go and then ran with it.”

“For a digital content creator, this is a huge opportunity,” Japhy Grant told us. “How often do you get to pitch an idea, execute and then present in front of executives from YouTube, MTV & Yahoo all in the span of 48 hours? The talent at the event was off-the-wall impressive and we’ve all be in contact and working with each other since the event, not only on developing our shows further, but on other projects as well. I think that may be the most lasting impact Idea Jam has. It basically brought together a whole “class” of digital content creators through this shared experience. These folks are now my go-to group when developing new projects. Thanks to Idea Jam, we all speak the same language now, not only in terms of thinking about what digital content ought to be, but how it can be executed rapidly and expertly.”

The IdeaJam series itself will continue with at least three more similar events in LA, according to Katalyst. The next one, IdeaJam 2 hits on the hot field of edu-tech and was moderated by education expert Alan November. “Creativeng the Ideal Classroom” will debut online June 13. The following two IdeaJams will go down later this summer with a focus on animation in one and comedy in the other.

“There’s something about not sleeping for 48 hours and creating non-stop that puts you in an amazing state of mind,” added Polonsky. “You just feel so focused and zoned in — absolutely wired. Nothing else matters. ”

Batt and the Katalyst gang are bullish on online video, noting there increased focus on producing more web original series after their earlier efforts like animated comedy Blah Girls and office docu-comedy KatalystHQ. “We’re stepping more into being more active in producing content for the web, abd have a lot of interesting stuff up our sleeves,” he said of the to-be-announced slate of originals.

“It’s hard to be a publisher no matter what, but if you’re producing content, specifically video, the timing has never been better,” added Batt. “But I think if you can own a vertical there’s a high likelihood that you’ll be successful.” Batt pointed to Machinima.com as one of the vertical successes to model.