The Royal Wedding Live Streams (All at Once) 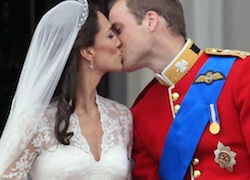 Did you get up at an ungodly hour this morning with 2 billion other humans on the planet Earth to watch the Royal Wedding? (Editor’s Note: 2 billion? Really?!? Almost ⅓ of the world’s population tuned in to some television or internet device to watch Prince William peck Kate Middleton? Who comes up with these viewership estimates? Glenn Beck?)

If you did get up at an ungodly hour to to watch the Royal Wedding, did you develop some type of platform paralysis, which rendered you unable to make a decision about where to watch the event because of all the live streaming options? Me too! So I watched them all.

The below is a screen capture of my Royal Wedding viewing experience, with concurrent live streams from Hulu, PBS, CBS, and YouTube in the foreground and the Associated Press and Jay and Silent Bob in the background. In terms of quality, CBS won (upper right hand corner), YouTube (lower left) and PBS (lower right tied for second, and Hulu (upper left) came in last.

William and Kate’s wedding, as predicted, was viewed by a helluva lot of individuals online, but didn’t blow away previous online streaming records. Livestream reports its livestream of the event peaked at over 300,000 concurrent viewers, while Akami says it saw 2.9 million simultaneous streams. Those are big numbers, for sure, but not nearly large enough audiences to make the British nuptials more popular than a number of football matches.

That’s good news in my book. I’ll take living in a world that worships Wimbeldon and Ronaldo over the veneration of a “sacrificial lamb to water the dried bones and veins of a dessicated system” any day.