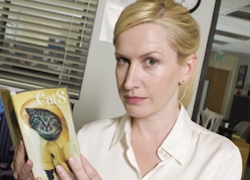 Who watched the season finale of The Office last night? Who didn’t cry? Who still hands their hands up in the air right now and is lying? Got you! It was emotional, right? I know. And if you want to relive some of the emotionalness of it all but by a method other than watching the season finale all over again, you should check out the latest installment of Adventures with Angela.

The NBC web series follows the real-life exploits of actor Angela Kinsey, who plays uptight Angela Martin on the hit NBC sitcom. She and her colleagues sit in their trailers while they’re hurrying up to wait to act and discuss things like who would be a good replacement for Steve Carell or the how, when, and why of double dating. The camera also follow Kinsey to EW photoshoots and appearances on Yo Gaba Gaba (while the documentary crew stays off camera).

In the most recent webisode, Kinsey follows Steve Carell into his own trailer and asks the actor to recount some his most favorite times and fondest memories during the past seven seasons of The Office. It’s heartfelt, revealing, makes you smile, and – if you’er a fan – definitely worth a watch.

Here’s to hoping the next goodbye from an actor who plays the manager of the Scranton branch of Dunder Mifflin doesn’t come from Ray Romano.